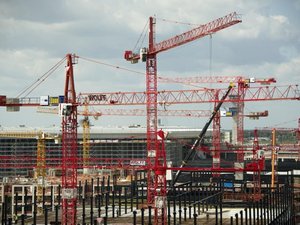 Robust growth and record low unemployment enabled Germany to slash its public deficit last year, even if Europe's biggest economy ground to a halt at the final months, data showed on Friday.

Germany -- which given its economic clout has assumed a leading role in the fight to end Europe's chronic debt crisis -- ran up a deficit equivalent to just 1.0 percent of output last year, down from 4.3 percent in 2010.

It is the first time in three years that the German deficit ratio has been below the 3.0-percent ceiling imposed by the EU and puts Berlin in a powerful position in the efforts to find a solution to a crisis that is threatening to break up the single currency and push the entire world into recession.

Europe's current financial woes stem from long years of overspending by governments and growing doubts on the financial markets that countries will ever be able to pay back their vast mountains of debt.

Germany itself has fallen foul of the very rules that it was so keen to impose on profligate southern European neighbors in the early years of currency union and its deficit has spiraled upwards in recent years.

But it is now reaping the benefits of the deep and painful economic restructuring undertaken in the past and the overall state deficit -- which covers budgets for central government and regional governments, social services and the local authorities -- is coming down.

In concrete terms, the deficit -- the gap between income and spending -- amounted to 25.3 billion euros ($33.8 billion) in 2011, compared with 105.9 billion euros in 2010, the national statistics office Destatis calculated.

While the federal government and the regional governments of Germany's 16 states still spent more than they received in revenues last year, the municipal authorities ended the year with a modest budget surplus.

And the social welfare system achieved its biggest budget surplus since unification in 1991 thanks to the favorable situation on the labor markets, according to Destatis.

Germany has performed much better than its Eurozone partners during the debt crisis, notching up robust growth of 3.0 percent last year, while unemployment fell to record lows.

Nevertheless, the crisis has not left Germany totally unscathed and growth shuddered to a halt at the end of the year, contracting by 0.2 percent in the period from October to December.

On Thursday, the EU Commission in Brussels warned that the debt crisis will drag the Eurozone into a long-feared double-dip recession this year, pulling down most neighboring non-euro economies in its wake.

But analysts believe Germany will remain immune to the worst and a whole range of forward-looking indicators, such as the Ifo business climate index, all suggest that the dip in the German economy will prove only temporary.

Exports, too, should remain "fairly resilient exports, with weak demand in much of Europe being offset by persistently solid growth in emerging Asia and an improving U.S. economy."

The relatively weak level of the euro would also have a supportive effect.

"Indeed, the ECB may well ease monetary policy further in the coming months, depending on overall economic developments in the Eurozone, which will keep financing conditions quite favorable for German firms in the foreseeable future," Klein said.

While the first quarter might get off to a "sluggish start... we're expecting a pick-up in the second quarter," Ott predicted.

Thomas Harjes of Barclays Capital Research said: "All in all, we continue to see the economic contraction in the fourth quarter as a temporary soft patch and expect that a moderate recovery is already underway and may gain steam in the course of the year."

But Jennifer McKeown at London-based Capital Economics was less optimistic.

"While survey data point to a slight improvement in the first quarter, we doubt that this will be sustained," she said.

Employment growth was set to slow and "given concerns about the potential impact of bail-outs on the German public finances, households will probably favour saving over spending."

So while Germany might avoid a recession, "the economy is likely to manage extremely slow growth at best," she predicted.