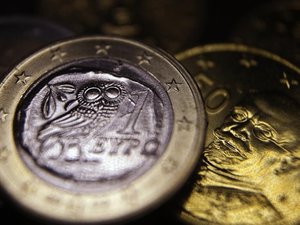 Greece will launch a bond swap on Friday under a deal with private investors to write off 107 billion euros from its debt mountain of 350 billion euros ($462 billion).

The bond swap, in effect a cancellation of nearly a third of debt owned by Greece, is a critical part of a debt rescue stitched together with immense difficulty by the Eurozone and International Monetary Fund, to avert imminent default.

It is a second overall rescue for Greece, but the bond component, now at the last hour of the timetable for application, depends on the rate of participation by private investors.

Finance Minister Evangelos Venizelos said an official offer to private creditors must be made by Friday so the debt swap can be concluded by March 12 on a first set of bonds.

Bankers, insurance companies and hedge funds which hold Greek government bonds were to get precise proposals on the debt swap, deciding whether to take a 53.5-percent loss on their holdings.

The bond deal was reached with negotiators from the body representing private creditors, the Institute of International Finance.

The announcement of the swap offer was expected after approval by the government, due at meeting beginning later in the morning, a statement from Prime Minister's Lucas Papademos said.

The call comes a day after the Greek parliament adopted an emergency law allowing the historic debt write-down with private creditors.

The law details terms of the so-called Private Sector Involvement (PSI) accord, agreed during the marathon talks in Brussels.

Under the terms of the overall Brussels accord, Greece will receive up to 130 billion euros in direct loans by 2014, helping it avert a debt default next month, in return for tough new austerity measures and tighter EU-IMF oversight of its economy.

After months of talks, it seems likely that most private creditors will accept the deal, mindful that they could get nothing at all if Greece were to default.

If Greece gets at least 66 percent of the private creditors to sign up the deal, it plans to impose a Collective Action Clause (CAC) which would force any hold-outs to accept it too.

Venizelos said an official offer to creditors had to be made by Friday, so a debt swap could be concluded by March 12 for maturities governed by Greek law, and by early April for debt issued under English and Japanese law.

The rescue package should be enough to avert a default by enabling Athens to repay maturing debt worth 14.43 billion euros due on March 20.

Venizelos said rating agencies "might declare Greece in selective default" while the debt-swap operation was ongoing.

"A selective default is only critical if the ECB (European Central Bank) and the Eurozone consider it so. There is a full mechanism to cover liquidity in the meantime," Venizelos said.

Until the end of February, Greece should approve more than three billion euros in additional spending cuts and amend the constitution to ensure that debt repayments take priority over other government commitments -- as demanded by the Eurozone finance ministers.

The parliament is now to turn to adopt legislation by next Thursday on further austerity cuts and tough targets required to get an additional 130 billion euros in loans.

But the prospects for a crucial bailout were clouded on Thursday after the European Commission said Greek economy would shrink 4.4 percent this year, much worse than its previous estimate of 2.8 percent.

Greece, stuck in recession for five years and with unemployment above 20 percent and rising, has had to revise up its public deficit targets for this year to 6.7 percent from 5.4 percent of gross domestic product.

Many analysts believe that Greece cannot generate the growth needed to sustain its debt burden even after the latest bailout, seeing the accord as simply delaying an inevitable default.

In Brussels, EU officials said Eurozone finance ministers will meet on March 1 to assess Greece's readiness for the program, needed after a 110 billion euros deal agreed in May 2010 proved not to be enough.