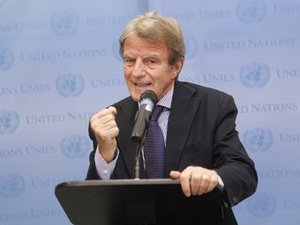 French Foreign Minister Bernard Kouchner said the option of the UN Security Council creating a Palestinian state cannot be ruled out, in an interview published Sunday.

Kouchner told the Palestinian newspaper Al-Ayyam that France preferred a two-state solution to be negotiated with Israel, but said appealing to the Security Council to resolve the conflict remained a possibility.

"We want to be able to soon welcome the state of Palestine to the United Nations. This is the hope and the desire of the international community, and the sooner that can happen the better," he said.

"The international community cannot be satisfied with a prolonged deadlock. I therefore believe that one cannot rule out in principle the Security Council option," he said.

"But the establishment of the Palestinian state must come as a result of the peace process and be the fruit of bilateral negotiations."

Kouchner, who met with Israeli officials, including Prime Minister Benjamin Netanyahu, on Sunday at the start of a two-day visit to the region with Spanish Foreign Minister Miguel Angel Moratinos, said the European Union, the largest donor to the Palestinian Authority, should play a more prominent role in the peace process.

Later, Kouchner stressed the "urgency" that the EU felt for the creation of a Palestinian state through the current peace talks.

"This is a moment that we do not want to miss," he said ahead of a meeting with Israeli Defence Minister Ehud Barak.

Palestinian president Mahmud Abbas told Arab foreign ministers over the weekend that he would consider alternative options, including appealing to the Security Council, if peace talks remained stalled over Israeli settlements.

Israel has refused Palestinian and international demands to extend a 10-month moratorium on new settler homes that expired last month despite Abbas vowing that there will be no further talks until settlement activity halts.

As a permanent member of the Security Council, France, like the United States, Britain, Russia and China, would be able to veto any measure calling for recognition of a Palestinian state in territories occupied in 1967.(AFP)