Van Persie: Defeat Not an Option 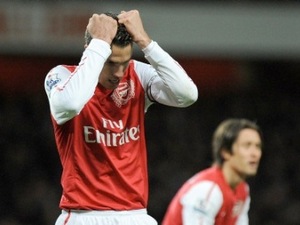 Robin Van Persie has confirmed Arsenal's north London derby clash with Tottenham Hotspur will carry an extra edge by insisting it is a game Arsene Wenger's side simply cannot afford to lose.

Local rivalry ensures the visit of Spurs to the Emirates Stadium is always highly charged.

But for the first time in many years, Harry Redknapp's side go to the home of their rivals as clear favorites to win - and with the Gunners' season in danger of imploding.

Wenger's Arsenal team face their near neighbors having exited the FA Cup at the hands of Sunderland and been all but eliminated from the Champions League after losing their last 16 first leg tie with AC Milan 4-0.

That means a top four finish, and with it a place in next season's Champions League, is Arsenal's only realistic chance of salvaging something from the season.

But with a 10-point gap between Wenger's men and third placed Spurs, and Chelsea, Newcastle and Liverpool all challenging strongly for fourth, van Persie knows there is no margin for error.

"They're above us for the first time in many years but it's in our hands to change the way things are going, win the game and start moving closer to them," van Persie said.

"A draw will not be a good result for us (on Sunday), either in our bid to catch up with Spurs or in our efforts to fight off our other challengers for a Champions League place."

Wenger admits every game counts now and said: "I don't know if this is my most important derby. It is the most important game because it is the next one.

"That is what top-level sport is like. For us it is important because we have an opportunity to come back closer to Spurs and strengthen our position in fourth place, which is a very important target."

The Arsenal manager has not given up hope of overhauling Spurs, though.

"You judge at the end of the season," he said. "The only thing you can say is that in the last 15 years Spurs have finished behind Arsenal."

Redknapp, meanwhile, made it clear that finishing above Arsenal, and Chelsea too, would be a major achievement.

"It's the most important thing this year to be honest," he said. "I really want to be the top London club and at least keep that third place if we can.

"It can all change very quickly so we have got to keep it going and keep playing the we are playing to do that but finishing as the top London club would be the key - anything above that would be a bonus."

Then, of course, the hard work to maintain that status would begin.

"Chelsea are not going to lay down and neither are Arsenal if they don't make it this year," Redknapp added.

"You have got to keep improving and it's about how ambitious you are. The chairman is ambitious here and there is no reason why we can't keep pushing on."

Redknapp should be able to welcome Luka Modric back from illness and Benoit Assou-Ekotto, Emmanuel Adebayor, and Rafael van der Vaart from injury.

Adebayor, the former Arsenal forward, is likely to receive abuse from Arsenal supporters.

That had been the case at White Hart Lane earlier in the season and the on-loan Manchester City forward had previously taunted them with an elaborate goal celebration.

Redknapp was confident the Togo international would not overstep the mark however. "I don't think it will be a problem but I suppose he will get some stick," Redknapp said.

"That goes with the territory now when you go back to your old clubs but I am sure he can handle it. Hopefully he will keep his cool as that is what he needs to do."