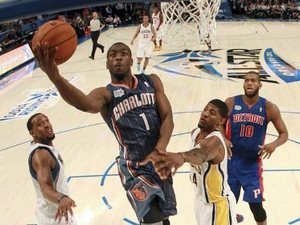 Kyrie Irving kicked off the aerial display with an alley-oop to Paul George. Cleveland's rookie point guard then showed off his long-range shooting skills.

It was so much fun that Irving wasn't too upset that all those 3-pointers came in a meaningless game.

Irving was a perfect 8 for 8 from beyond the arc and finished with 34 points, helping Team Chuck beat Team Shaq 146-133 in the Rising Stars Challenge on Friday.

Indiana's George added 23 points but the night belonged to Irving, who picked up where another No. 1 overall pick left off in the NBA's showcase game for its first- and second-year players. Wizards point guard John Wall earned MVP honors last season when he was a rookie.

Irving said he couldn't remember being so hot from the field.

"No, it's never occurred in my career," he said. "You know, it's kind of unfortunate that it comes in the All-Star game. These stats don't carry over into the season. But at the end of the day, it was still fun to get out there with those talented guys. So it was a great experience."

This year's Rising Stars Challenge had a different format, with the rookie and second-year players mixed together on teams for the first time. The league also inserted a little more name recognition with former stars Shaquille O'Neal and Charles Barkley serving as general managers and drafting the teams.

While the teams had a different look, there was once again no real defensive effort and plenty of fan-pleasing fast breaks and flashy play.

"It's what All-Star games are, there's not a lot of defense," Team Chuck co-head coach Maurice Cheeks said.

Lin had a relatively quiet night. His biggest highlight came early in the second half when he took a pass from Minnesota star Ricky Rubio and drove it underneath for a reverse layup.

He played just nine minutes before heading to the bench in the second half, and instead mostly yielded to the more high-flying players on his team. He took just four shots.

Landry Fields, who plays with Lin on the Knicks, remained his biggest fan, holding a "Linsanity" Time magazine cover featuring him.

"It was fun to be out there with all these guys, and this guy right here (pointing to magazine) did his thing," Fields said. "Short minutes, but he still did his thing."

Irving got the game off to a rousing start with the pass to George, and Rubio turned routine passes to his Shaq teammates into behind-the-back and between-the-leg looks.

It was part of an acrobatic early tone that was fast-paced and allowed the next generation of stars to showcase open-court and aerial skills that have already made many of them fan favorites on their respective teams.

Los Angeles Clippers forward Blake Griffin had several highlights while playing for Team Shaq, catching several alley-oops and even throwing his own pass off the glass and catching it for a dunk.

"There were a lot of dunks," Team Shaq co-head coach Ron Adams said. "I think the guys had fun. I hope we didn't set a Guinness Book of World Records record for dunks given, but it was a fun game. Interesting game."