G20 to Pile Pressure on Europe for Stronger Firewall 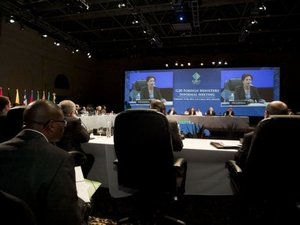 Top economic powers at the G20 meeting in Mexico's capital this weekend were set to urge Europe to do more to tackle its financial crisis before they commit to new funding for the IMF.

The European Union is seeking to gain support for an additional $500 billion of resources for the International Monetary Fund at the G20 meeting of finance ministers and central bankers in Mexico City on Saturday and Sunday.

But with markets calmer due to the latest rescue for Greece and increasing divisions over how to handle the debt crisis, attention has turned to Europe's efforts to build up its own financial "firewall," as well as to longer-term structural and fiscal reforms.

Countries including the United States, Japan and Canada are looking to the Eurozone to boost its firewall at a summit in Brussels next week.

They have suggested the 17-nation bloc combine its temporary European Financial Stability Facility with the permanent European Stability Mechanism, due to come into force in July, to provide a warchest of around 750 billion euros ($1 trillion).

"We still have to build the mother of all firewalls," Angel Gurria, Secretary General of the Organization for Economic Cooperation and Development, said Saturday.

"Every day, the cost of the uncertainty and the cost of indecision is enormous," he said. "You can't accuse Europe of being too fast."

The British and Japanese finance ministers, George Osborne and Jun Azumi, added pressure in a Financial Times editorial this week.

"The Eurozone must increase the resources of its firewall so the markets can be reassured that it can respond to any eventuality," they wrote.

And U.S. Treasury Secretary Timothy Geithner said Friday that the firewall "needs to be big enough to make credible the commitment that you've heard from leaders of Europe that they're going to hold this together."

"What we don't want to see is the IMF substitute -- and it really cannot substitute -- for a stronger European response," he told CNBC television.

While most Eurozone countries have shown little objection to the idea of a bigger firewall, the bloc's paymaster and most powerful nation Germany has been strictly against it.

Berlin believes that with the Greek rescue all but tied up and a more relaxed market environment, there is no need to boost the firewall's firepower.

Defending his country's efforts to stem the crisis, the head of Germany's central bank, Jens Weidmann, insisted in the run-up to the meeting that "Germany is doing a great deal to help its partners."

Germany and other European nations are piling on the heat on non-European members of the G20 such as the United States, China and Japan, to help boost the IMF's funding.

Eurozone countries have already committed an additional 150 billion euros in bilateral loans but the United States has repeatedly refused to put in more money.

Emerging economies such as Brazil have suggested they could eventually increase their contributions in return for more decision-making power within the lending body.

Mexico hopes to focus its presidency of the G20 on creating a stronger financial system for the future with structural reforms, better checks on banks and promoting the green economy.

Mexico hopes to make headway on IMF funding this weekend but does not expect much progress before a heads of state summit in Los Cabos in June.

"Things will be clearer then," Mexican Finance Minister Jose Antonio Meade said, downplaying expectations ahead of the meeting.