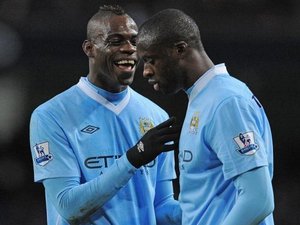 Manchester City opened up a five-point lead at the top of the Premier League with victory over Blackburn on Saturday as Chelsea beat Bolton to ease the pressure on manager Andre Villas-Boas.

With second-placed Manchester United not playing until Sunday's trip to Norwich, City took full advantage of the opportunity to crank up the pressure on their cross-town rivals by taking all three points at Eastlands.

Goals from Mario Balotelli, Sergio Aguero and substitute Edin Dzeko duly sealed a 3-0 win for Roberto Mancini's side, who extended their remarkable 100 percent record at home this season to 13 matches.

The win was also City's fifth straight victory in February, giving Mancini cause for confidence in the title run-in.

"I think we've had a good February -- but we now need to have a good March, April and May if we want to win the title," Mancini said.

"It was a hard game. It was difficult. Blackburn play with 10 players behind the ball and if you don't score you have a problem."

Meanwhile Chelsea boss Villas-Boas breathed a sigh of relief after watching his team down struggling Bolton 3-0 at Stamford Bridge.

Second-half goals from David Luiz, Didier Drogba and Frank Lampard gave Villas-Boas something to smile about after a difficult week which saw the Blues pushed to the brink of elimination from the Champions League.

The victory -- Chelsea's first in five league matches -- saw Villas-Boas's side move back into the Champions League qualification places, three points ahead of fifth-placed Arsenal, who face Tottenham on Sunday.

"It was important to win after all the recent disappointments. We have been trying so hard and today we managed to do a great, great game," Villas-Boas said.

"We managed to find the efficiency in front of goal that we haven't had in the last few games and we are back on track in the league."

After a poor first-half display, Chelsea's nerves were settled moments after half-time when much-maligned Luiz shot the Blues ahead.

The Brazilian international picked up a loose ball and took his time before rifling into the bottom corner past Adam Bogdan.

Chelsea made the game safe on 61 minutes when Drogba headed in Lampard's corner for 2-0. Lampard, reportedly fuming at his treatment by Villas-Boas recently, then completed the scoring on 79 minutes, his 150th league goal.

Caretaker Wolves manager Terry Connor saw his relegation-threatened side produce a stirring fightback from 2-0 down to grab a share of the points against high-flying Newcastle at St James Park.

Wolves looked to be dead and buried at the interval after goals from Papiss Demba Cisse and Jonas Gutierrez saw the Magpies surge into a 2-0 lead.

But Matt Jarvis launched an improbable Houdini act on 50 minutes to make it 2-1 before Kevin Doyle leveled it in the 66th minute.

The hard-earned point was enough to lift Wolves out of the relegation zone at the expense of Blackburn.

Connor said he had always believed in his team's spirit despite trailing 2-0 at the break.

"I know what the dressing room is like and I know how they react in adversity when things don't go quite their way," Connor said.

"But I had a feeling they would react in the right manner, a positive manner, and they did that today.

A miserable afternoon for Mark Hughes' Rangers also saw Malian midfielder Samba Diakite sent off on his debut for a second yellow card after a clumsy lunge on Bryan Ruiz after 33 minutes.

West Bromwich Albion brought Sunderland's recent run of good form to a shuddering halt after romping to a 4-0 win at the Hawthorns.

Peter Odemwingie bagged a brace while James Morrison and Keith Andrews grabbed one each as the Baggies ran riot to leave Martin O'Neill's side reflecting on their worst defeat of the season.

"It was a poor day for us and I hope that we can learn something from it," O'Neill said. "We were second best and we didn't deserve anything from the game."

Elsewhere, bottom club Wigan battled to a 0-0 draw against Aston Villa at the DW Stadium.