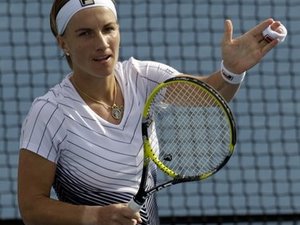 Their record-breaking fourth round marathon in the Australian Open lasted four hours and 44 minutes. This time their third round match lasted not quite two hours, but contained an improbably fluctuating final set which continued 18 minutes longer than the first two sets together.

"Somehow she gets me out of it," said Kuznetsova in a puzzled voice, reflecting on the 12 match points the tenacious Schiavone saved in the two memorable contests.

"Actually I was playing better in Australia, but somehow it just didn't go my way. Again here I couldn't close it out -- just one stupid point, I said to myself. It was very difficult but I did it."

Kuznetsova, increasingly taking risks in charging to the net against a Schiavone who preferred weaving a web of varied ground strokes, had to endure two other trials.

She needed to save three crucial break points at 3-3 in the third set, and to recover from her annoyance at a trainer who apparently tried to put air into Kuznetsova's ear during a medical time out.

"I was upset because I couldn't hear anything," Kuznetsova said. "I am like, 'where are the drops? You know, I have enough air already. I have all air'.

"And I say, 'please, can you put drops. I ask for it two games ago'. She said 'yeah next changeover'. I say, 'there may be no next changeover. It's 4-3 in the third set. You cannot do these mistakes right now.'

"I am pissed because I was nervous, I was intense. Everybody can make mistakes. But I just want everybody to understand that it's important. It's third set; it's no jokes here. It's maybe the last chance, you know."

Kuznetsova nevertheless broke serve in the following game for 5-3, earned two match points two games later, and four more on Schiavone's serve at 6-5 before winning another of many unpredictable rallies with a tightly angled forehand inside-out drive which just clipped the sideline.

"I feel embarrassed at being down at 23 in the world, but I know that at some stage I will be back in the top 10, and hopefully in the top five," she said later.

Another leading player to go out was Vera Zvonareva, the second seed, who was beaten 6-3, 6-2 by her tall and hard-hitting Russian compatriot Alisa Kleybanova on a breezy outside court.

"I had absolutely different opponent with different style of game, very powerful," said Zvonareva, comparing Kleybanova with the Italian Roberta Vinci, whom she overcame in her opening encounter.

"To handle that pace, I was trying to use pace as well, and I felt my ball was flying a lot and I made a lot of unforced errors. I just could not readjust." Zvonareva also delivered a double fault in six of her eight service games.

Earlier Yanina Wickmayer, who on yesterday upset the fifth-seeded Li Na, the first Chinese player to reach a Grand Slam final, was herself beaten.

The second best Belgian was gradually worn down 3-6, 6-4, 6-1 by the tenacity and mobility of Shahar Peer, the first Israeli woman athlete to compete in the UAE, who is still playing only on her security-designated outside court.

Peer typically played her best tennis from 4-4 in the second set, and earned herself a place in the quarter-finals where her likely opponent was the top-seeded Caroline Wozniacki.