Harb after Meeting Gemayel: Lebanon Cannot Remain a State within a State of Illegitimate Arms 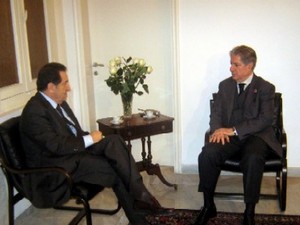 Caretaker Labor Minister Butros Harb stated on Thursday that the ongoing consultations in among the March 14 camp are aimed at devising ways to positively deal with Prime Minister-designate Najib Miqati’s proposals and confront the campaigns against the president and government in a way that would preserve Lebanon’s political system.

He said after holding talks with Phalange Party leader Amin Gemayel: “The March 14 camp is in a constant state of consultation and meetings are held away from the media spotlight in order to maintain its unified position from the government.”

“Should it decide to take part in the new government, it would do so on the basis of its values and not the values of others,” he stressed.

Addressing Hizbullah chief Sayyed Hassan Nasrallah’s recent criticism of the March 14 commemoration ceremony at Biel, the minister commented: “We live in a democratic system and listen to others. We hope that others will hear us.”

“It’s no longer acceptable that the situation in Lebanon remain as it is. We cannot accept that the state within a state of illegitimate arms continue,” he said.

“We cannot accept the murder of Lebanon’s leaders without trying the criminals or that we take the place of a trial and issue our own judgments. We are committed to justice and on this basis, our hand is extended to the other camp,” he said.

For his part, Gemayel stressed that the Phalange Party’s hand will remain extended to the other camp, adding that consultations with the party’s allies are ongoing.

“We are ready for any dialogue that serves the national principals that Lebanon is built upon and affirms unity, sovereignty, and justice,” he said.

Addressing Nasrallah’s statement that the March 14 forces committed mistakes, he said: “If some sides, like Hizbullah, believe themselves to be above making errors, we consider ourselves human.”

“Hizbullah is the primary side that should reconsider its actions after all the adventures it has led the country to,” Gemayel stressed.