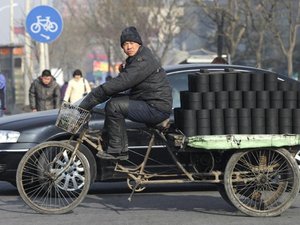 China has reached a "turning point" in its economic development, with the pace of growth likely to nearly halve in the next two decades, World Bank and Chinese government researchers said Monday.

The Asian giant must implement deep reforms to avoid a sudden slowdown in growth, such as scaling back its vast and powerful state-owned enterprises and breaking up monopolies in strategic sectors, the analysts said in a report.

After averaging 10 percent annual growth for the past 30 years, China's export and investment-driven economic model was no longer sustainable, World Bank President Robert Zoellick said at the launch of the "China: 2030" study.

"The case for reform is compelling because China has now reached a turning point in its development path," Zoellick told a conference in Beijing.

"The country's current growth model is unsustainable. This is not the time just for muddling through -- it's time to get ahead of events and to adapt to major changes in the world and national economies."

The report was backed by Vice President Xi Jinping and Vice Premier Li Keqiang, who are expected to succeed President Hu Jintao and Premier Wen Jiabao during a major transition of power that begins at the end of this year.

Despite this high-level support, the report prepared by the World Bank and the Development Research Centre under the State Council, China's cabinet, is likely to face resistance from people with "vested interests" in the current model, Zoellick said.

"Reforms are not easy -- they often generate pushback," he said.

Liu Shijin, Vice Minister of the Development Research Centre, said the reforms were necessary as the world's second largest economy slows to five to six percent annual growth in the next 20 years from the current nine percent.

Chinese leaders frequently talk about the need to reform the country's economic model, partly by reducing its heavy reliance on exports and increasing domestic consumption.

But significant reforms have been slow as stability-obsessed leaders try to maintain rapid economic growth seen as essential to create enough jobs for the country's 1.3 billion people and keep a lid on unrest.

The report makes a number of recommendations, including curbing the influence of state-owned enterprises, breaking up monopolies and making it easier for small and medium-sized enterprises to access funding.

Beijing prohibits or restricts foreign investment in certain sectors such as auto, energy, finance, banking and telecommunications, drawing criticism from overseas competitors over the lack of market access and unfair treatment.

Domestically, privately owned firms often complain about the lack of competition and the fact they cannot access financing from commercial banks, which prefer to lend money to other major state-owned enterprises.

The report also urges Beijing to commercialize the country's banking system and gradually remove interest rate controls as it seeks to "complete its transition to a market economy".

Such "concrete measures" were necessary as China seeks economic growth "based on stability", said Li Wei, Minister of the Development Research Centre.

Despite the ongoing Eurozone crisis and weakness in the United States, Zoellick played down fears of an economic disaster in China.

There are "stress points that will expand over time rather than (turn into) a crisis," Zoellick said, forecasting a soft landing for the Asian powerhouse.

But he acknowledged that the "devil will be in the implementation" of the reforms.