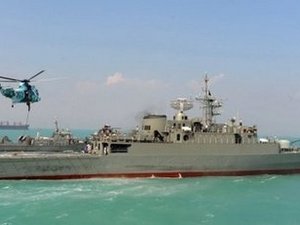 Iranian officials were in contact with their counterparts in Egypt to secure the passage of two warships through the Suez Canal, Tehran's English-language Press TV reported on Thursday.

The vessels intend to transit the canal, the channel's website quoted an unnamed Iranian navy official as saying.

"Iranian officials were in contact with officials in Cairo to secure the Iranian vessels' passage," the website said, adding that "Egyptian authorities believed there was nothing wrong with the passage."

Egypt insisted on Thursday it had not denied the two warships passage through the canal, but canal and shipping officials privately admitted they were blocked.

Iranian media had reported earlier this month that the vessels, part of a flotilla, would pass through the canal, prompting Israeli Foreign Minister Avigdor Lieberman to brand the move a "provocation."

The ships were due to transit on Thursday, Lieberman claimed a day earlier, but a senior Suez Canal Authority official insisted his office had not received a request to allow the ships through.

"We did not receive any request for the passage of Iranian warships," Ahmed al-Manakhly, head of the canal's operations room, told Agence France Presse, adding he had no idea if any such ships were nearing the canal.

"Any warship needs approval from the defense ministry and the foreign ministry. We have seen no such approval. Before they pass, I need to have such an approval in my hand," he explained.

But privately, a canal official said the warships were on the list of ships scheduled to pass to the Mediterranean Sea before the passage was canceled.

"They had permission, but the shipping agent told them yesterday the ships were canceling. He said they are near Jeddah, and no new date was set," he said, speaking on condition of anonymity.

Iran and Israel are arch-foes, with animosity between the two having surged under the presidency of Mahmoud Ahmadinejad.(AFP)