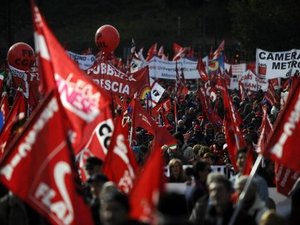 Business confidence in Italy fell this month to its lowest level since November 2009, an index from the Istat data agency showed on Monday, as the Eurozone’s third economy suffers through a recession.

The decrease is the third in a row and it confounded analysts polled by Dow Jones Newswires who had been expecting an increase to 92.3 points.

Istat said its survey showed that business chiefs were more pessimistic than before over orders but that their production forecasts had improved.