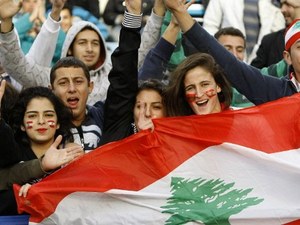 Premier Najib Miqati wished Lebanon’s national football team success in the Asian Football Confederation 2014 FIFA World Cup qualification match on Wednesday which will determine if it will join the fourth and final preliminary round.

Information Minister Walid al-Daouq quoted Miqati as telling ministers on Monday that he hoped “Lebanon would achieve the successes that we got used to seeing.”

Lebanon plays the UAE in Abu Dhabi . It needs just a single point from its match in order to advance to the next round.

The national team has become a big surprise in its advances in the qualification rounds thanks to head coach Theo Bucker, who took over in August.

Noooooo. Please. He just threw the evil eye on our national team. From now on, they'll be doomed :-/

lol don't worry Prime Suspect, nothing will stop us.. even our politicians can't destroy this great opportunity for us.

The finals will be held in Brazil not the "qualifiers"