Much-Anticipated NASCAR Season has to Wait a Day 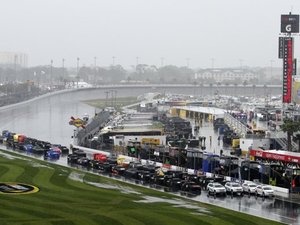 Following a captivating championship and the addition of Danica Patrick, the last thing NASCAR wanted was a glitch.

And certainly not a full-on delay that pushed NASCAR into a lunchtime slot Monday for its biggest event of the year.

But the stock-car series will have to deal with a lower-profile stage for its banner day to open a much-anticipated season.

The Daytona 500 was postponed Sunday for the first time in its 54-year history after heavy rain saturated Daytona International Speedway.

"I know a lot of race fans are disappointed and a lot of people at home on TV, but we just hope they tune in," driver Greg Biffle said.

NASCAR officials spent more than four hours waiting for a window to dry the famed track, but it never came. When the latest storm cell passed over the speedway around 5 p.m., they had little choice but to call it a day. The 500-mile race was rescheduled for noon Monday and will be aired on Fox.

It surely was a huge disappointment.

With several intriguing story lines on tap, NASCAR was hoping to capitalize on the success of last season's down-to-the-wire championship race between Carl Edwards and Tony Stewart.

The most significant of them all could be Patrick. The Daytona 500 is the first of 10 scheduled Sprint Cup Series events for Patrick, who left Indy Car behind for a full-time move to NASCAR. She will race for the Nationwide Series championship driving for JR Motorsports.

Stewart, the three-time and defending champion, is trying to snap a 0-for-13 losing streak in the Daytona 500. His 17 victories at Daytona include everything but the 500, ranking him second on the all-time list behind Dale Earnhardt's 34 wins. Stewart will start third when the green flag drops.

And there's Earnhardt Jr., the 2004 Daytona 500 champion. He takes a 129-race losing streak into the event. His last victory was in 2008, his first season with powerhouse Hendrick Motorsports.

Now, it's all on hold. And it could play out in time slots normally occupied for daytime soap operas.

"This is one of the toughest things for us drivers," said Edwards, who will start on the pole. "It's now who can really stay focused. That's not just the drivers, that's the pit crews, the crew chiefs, everyone, the officials. But I think we'll be just fine."

But Monday might be another test for both drivers and fans.

The forecast calls for more rain, and officials are prepared to wait all day and into the night to avoid a Tuesday race, which would strain teams that must get to Phoenix for next week's race.

"The longer runway we have tomorrow to get in the Daytona 500, the greater the likelihood for us to start and finish the event on Monday," NASCAR spokesman Kerry Tharp said. "There are certainly a lot of considerations that go into the start time decision, and we believe scheduling it for noon gives us the best opportunity for us to get the race in tomorrow."

Eight previous Daytona 500s have endured rain delays, the latest in 2009. But never before had storms forced NASCAR's premier event to be moved.

"I think that's a pretty good record for NASCAR," Edwards said. "They've been living right to have 53 of these and never have one postponed. That's pretty spectacular. ... I think NASCAR, they're doing the right thing, you know, not dragging this out."

Noontime showers sent fans scattering for cover and leaving everyone in wait-and-see mode. Puddles of water formed in parts of the infield, and many fans got drenched as they tried to make the best of a less-than-ideal situation.

Drivers retreated to their motorhomes, relaxing while keeping an eye on developments. Edwards, Brad Keselowski and others took naps. Former Daytona 500 winners Jamie McMurray and Trevor Bayne did in-studio interviews with Fox. Another previous race winner, Ryan Newman, played with his daughter in the motorhome lot.

"I guess I'm gonna have to win the first Monday Daytona 500," Biffle said.

The last shortened Daytona 500 was Matt Kenseth's victory three years ago, when rain stopped the event 48 laps from the finish. He was declared the winner while the cars were parked on pit road.

The 2010 race had more than two hours in delays as NASCAR twice stopped the event to fix a pothole in the surface. McMurray held off Earnhardt Jr. to win that race.

This time around, drivers didn't even get in their cars.

Now, NASCAR must deal with the downside of moving its biggest race. Ratings and attendance will suffer, falling short of what the series expected.

Fans surely will have complaints, too.

Daytona president Joie Chitwood said he understood fans were frustrated about the scheduling change that pushed the race back one week later than usual.

NASCAR and the track made the decision to move the start of the season to address an awkward early off weekend and to avoid potential conflicts with the Super Bowl.

Had the race been run on its traditional Sunday, it would have been completed under a bright, blue sky.

"I'm sure I'm going to have some customers tell me about the date change and the challenges that we have with it," Chitwood said. "But I think weather is unpredictable. I think based on the NASCAR schedule, the TV schedule on whole, this was the right move for the industry. We'll continue to work with the last weekend of February.

"It's unfortunate that this had to happen the first year after we made that change. I'm sure I'll be talking to a number of customers in the next weeks ahead about that situation."