Hariri: It's Unacceptable that Arms Become Means to Influence Political Life in the Country 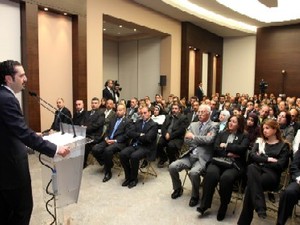 Outgoing premier Saad Hariri stressed Thursday that "it is unacceptable that weapons become a means to influence political life in the country," noting that the Lebanese "cannot build a country that way, as a country should have one army, one authority and one State."

"The weapons of any party must not become a means to undermine civil peace and the democratic system," Hariri added.

Speaking during a meeting at the Center House with Mustaqbal Movement cadres, Hariri said he had been "honest" during the failed Saudi-Syrian brokered talks with the Hizbullah-led camp on reaching a solution to the crisis over the U.N.-backed Special Tribunal for Lebanon, accusing the rival camp of "resorting to deceit."

"We are not weak, but rather strong through our words, steadfastness, solidarity and faith in our cause," Hariri added.

The caretaker premier reiterated that his camp will rally en masse on March 14 in support of "the State, the Constitution, the institutions, the Special Tribunal for Lebanon and truth."

"This tribunal is neither Israeli nor American," Hariri stressed, adding that "people should know the truth, not only behind the assassination of (ex-PM) Rafik Hariri, but also the truth behind the murder of all the martyrs."

On January 12, Hizbullah and its allies toppled Saad Hariri's cabinet in a long-running feud over the U.N.-backed STL, which the party believes will accuse several of its members of being involved in the 2005 murder of former premier Rafik Hariri.

Hizbullah-backed Najib Miqati was then appointed to form a new government, which Hariri's alliance has refused to join and has labeled "Hizbullah's government".

Hariri has refused to join Miqati's government unless he guarantees his cabinet will see the tribunal through.

Hizbullah meanwhile is demanding Lebanon end all cooperation with the court, which it says is a U.S.-Israeli conspiracy.