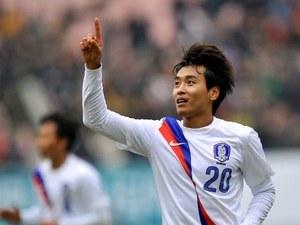 The Koreans are level on 10 points at the top of Group B with Lebanon, who defeated South Korea 2-1 in November in a shock reversal that prompted the sacking of coach Cho Kwang-Rae.

Kuwait are third in the group on eight points ahead of the final round of games in the current qualifying stage.

With the top two in the group going into the final Asian qualifying round, South Korea's 2014 World Cup dream will be over if they lose and Lebanon draw or win away at the United Arab Emirates.

Cho's replacement Choi Kang-Hee spoke of a "crisis" when he named an experienced squad for the match in the South Korean capital.

He faces a dilemma over his frontline, with the 32-year-old Lee Dong-Gook expected to start but Arsenal striker Park Chu-Young, who has hardly played since his move to London, a major doubt.

Like midfielder Ki Sung-Yueng, who plays in Scotland for Celtic, Park only joined up with the rest of the squad on Monday afternoon.

"I cannot make much of a tactical demand from them as they have not left enough time for training," Choi said of the influential pair.

"But their presence will certainly make my job easier. Now I have to think about how to make the best use of them. I can use Park and Ki as starters or late-game jokers."

South Korea reached the World Cup semis in 2002 when they co-hosted the tournament with Japan, who could give an international debut to their flying Arsenal winger Ryo Miyaichi, who joined Bolton on loan in January.

The reigning Asian champions are already through to the final qualifying stage and their Italian coach Alberto Zaccheroni said he was eager to see the 19-year-old in action against fellow Group C qualifiers Uzbekistan.

"He has performed at Bolton well in an eye-catching manner. He has a lot of quality and that's why I have called him up," said Zaccheroni.

Of Asia's other major powers, Australia are also already through, but Socceroos skipper Lucas Neill vowed there would be no let-up against Frank Rijkaard's Saudi Arabia, who can still qualify.

Australia are out of reach in Group D, but the Saudis have six points, Oman five and Thailand four, meaning all three are in with a shout of qualifying on what promises to be a nervy evening.

Rijkaard knows his side may not have to win to qualify, depending on the result in Oman, but the Dutchman said they would be gunning for all three points.

"All our ambitions are concentrated on getting a win tomorrow," Rijkaard said.

"Even if we have a bad win tomorrow, we are focused to get a win."

Another key tie sees a top-of-the-table showdown in Group E between Iran and Qatar. The Iranians are through and Qatar, the 2022 World Cup hosts, look certain to qualify ahead of Bahrain.

Bahrain, who take on Indonesia in Manama, are three points behind Qatar and have a far inferior goal difference.

Also already into the last qualifying round are Jordan and Iraq in Group A, but China and North Korea are out.