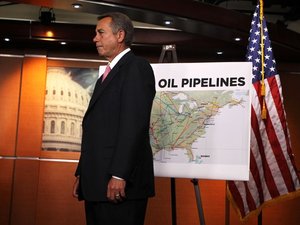 TransCanada Corp announced Monday it would go ahead with building part of the controversial Keystone XL oil pipeline between Oklahoma and the Texas coast that does not require U.S. presidential approval.

The company also said it will resubmit its proposal for the entire $7 billion pipeline project from Canada's oil sands of Alberta to Gulf Coast refineries that U.S. President Barack Obama rejected last month.

Construction of the southern leg from Cushing, Oklahoma to the Texas refineries is expected to be completed by mid to late 2013 at a cost of $2.3 billion, TransCanada said.

The Keystone XL pipeline has turned into a major issue in U.S. politics, with environmentalists waging months of protests and the oil industry funding an advertising blitz, claiming the project would immediately create jobs amid a weak economy.

Environmentalists fear an accident along the 2,700-kilometer pipeline would spell disaster for aquifers in central U.S. Great Plains states. They also oppose the project because exploiting the oil sands requires energy that generate a large volume of greenhouse gases.

Supporters say the pipeline will help lead towards energy independence, and that it will quickly create thousands of construction jobs.

The White House welcomed TransCanada's announcement, saying the southern pipeline "will help address the bottleneck of oil in Cushing that has resulted in large part from increased domestic oil production, currently at an eight-year high."

However House Speaker John Boehner, who supports the full pipeline project, accused the president of trying to "have it both ways" by supporting the southern segment.

"If the president thinks this project is good for America, he knows how to make it happen right away. Until he does, he's just standing in the way of getting it done," Boehner said in a statement to ABC News.

In January Obama rejected the original $7 billion pipeline proposal, saying he could not vouch for its safety by a February 1 deadline.

TransCanada said it will submit a new application for the northern leg that will include "an alternative route in Nebraska as soon as that route is selected," as well as an "already reviewed route" in Montana and South Dakota.

The State Department said it would apply the environmental review findings of the original project "to the degree that it is applicable to the new application."

In an assessment submitted to Congress, the State Department said TransCanada's stated plan would result in 5,000 to 6,000 U.S. construction jobs for two years, but not result in significant longer-term employment.

TransCanada president Russ Girling said that by proceeding now with the southern pipeline, increased oil production in Oklahoma, Texas, North Dakota and Montana will be able to flow to U.S. Gulf Coast refineries.

Those refineries "can then access lower cost domestic production and avoid paying a premium to foreign oil producers," he said. "This would reduce the United States' dependence on foreign crude and allow Americans to use more of the crude oil produced in their own country."

Pipeline opponents however claim the opposite.

"Relieving the glut of oil in Cushing... will drive up oil prices in the Midwest and in turn have implications for gasoline prices across the country since the Midwest has in recent years become a major producer of U.S. gasoline," she told Agence France Presse.

Kim Huynh of Friends of the Earth was adamant in her opposition.

"Any attempt to move forward with any segment of the pipeline will be met with the same fierce grassroots opposition that stopped the pipeline the first time," Huynh vowed.