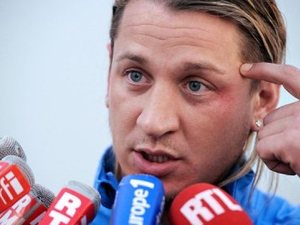 The suspension was confirmed by the Italian Football Federation (FIGC) which acted after reviewing video footage of the match which left Milan one point clear of Juve at the top of Serie A.

French center-back Mexes hit former Roma colleague Borriello in the side early in the second half.

The Milan back was deemed to have acted intentionally and violently by the FIGC.

Milan are considering whether to appeal the suspension.

Milan's Ghana international Sulley Muntari was let off for violently shoving Stephan Lichtsteiner while no action was taken against Milan old boy Andrea Pirlo who had been accused of elbowing Mark van Bommel.

Juve finished the match at San Siro with 10 men after Chilean midfielder Arturo Vidal was shown a late red card for a challenge from behind on Dutch enforcer van Bommel.