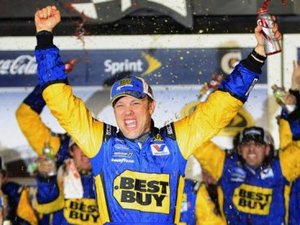 Well, NASCAR certainly knows how to make a prime-time impression.

Rain, fire, and Tide laundry detergent all factored into a Daytona 500 that will go down as the most bizarre in NASCAR history.

And Brad Keselowski tweeted most of it live. From his race car. Then he provided another update minutes after crashing at 190 mph.

"You would think after 65 years and running all the races that NASCAR has run ... that you've seen about everything," NASCAR President Mike Helton said. "You do think about, 'Oh, my gosh, if that can happen, what else can happen?'"

The first Daytona 500 to be postponed took more than 36 hours to complete after rain pushed it from its scheduled Sunday afternoon start to Monday at lunch, and ultimately turned it into the first ever NASCAR race run in prime-time television.

Then Juan Pablo Montoya crashed under caution into a safety truck filled with about 200 gallons of jet fuel, and the collision caused a massive fireball that scorched the track and will be the most indelible image of the 54th running of the "Great American Race."

What did they use to clean it up? Tide laundry detergent, of course.

The two-plus hour stoppage turned into a tweet-up of sorts, as the drivers climbed from their cars and crowded around Keselowski, who had pulled out his phone to provide real-time updates to his fans by posting photos and answering questions. His number of followers ballooned from about 65,000 at the start of the race to almost 200,000 by the time the fire was extinguished and racing could resume.

"I thought it was pretty funny," said Dale Earnhardt Jr., who had his losing streak hit 130 races when he came up short in his bid to chase down Kenseth in a two-lap overtime sprint.

"That was kind of fun actually, standing around on the back straightaway. We did take the phone and put it to some use and looked up the weather."

When the 500 finally ended in the early morning hours Tuesday, the two-week SpeedWeeks odyssey wasn't over: Fog closed the North Carolina airports, stranding drivers and teams at Daytona for yet another night.

"Now believe it or not I can't go home," fourth-place finisher Denny Hamlin posted on Twitter. "Fogged in. Yet another night in Daytona."

The endurance race will be long over by the time the television ratings come in later Tuesday. No one was sure what to expect as Fox made the unprecedented decision to show the race in prime time — the best case scenario once rain washed it out on Sunday. NASCAR originally rescheduled for Monday afternoon but scrapped those plans in the morning based on more rain.

What happened was a show like no other, beginning from the second lap of the race, when five-time NASCAR champion Jimmie Johnson was caught in an accident that also collected Danica Patrick, ruining her Daytona 500 debut.

From there it was 25 lead changes among 13 drivers, 10 cautions, and that really big fire.

"The thing that comes into my mind is NASCAR just can't catch a break," Earnhardt said. "We're trying to deliver, and we just have some unfortunate things happen such as the rain delay, potholes in the track a couple of years ago. We're a good sport, and we're trying to give a good product."

Kenseth and Roush Fenway Racing teammate Greg Biffle took over the lead following the fire stoppage with 40 laps to go.

Montoya was driving alone under caution when something broke on his car. He spun hard into a safety truck, and the collision caused an instant explosion.

Montoya, who said his helmet was singed in the fire and his foot ached, said he felt a vibration in his car before the accident.

"I've hit a lot of things — but a jet dryer?" he said. "It just felt really strange, and as I was talking on the radio, the car just turned right."

Jet fuel — the safety truck held 200 gallons of kerosene — poured down the surface of Turn 3 at Daytona International Speedway after the accident, creating a fiery lasting image of NASCAR's biggest race of the year.

Journeyman driver Dave Blaney was leading at that time because he had not pitted, and all the drivers surrounded him and Keselowski as they lingered outside their parked cars during the cleanup.

Blaney's lead was short-lived, however, as he pitted for gas as soon as racing resumed. Kenseth took over the lead, with Biffle behind him, and the race went green with 34 laps remaining.

It became clear immediately that nobody could catch the Fords. Earnhardt tried several different strategies, same for Hamlin, but neither could get between Kenseth and Biffle.

Until the final lap, Biffle dutifully stayed in line behind his teammate, and when Earnhardt finally tried to make his move around him, neither driver could catch Kenseth.

Earnhardt held off Biffle at the line, while Kenseth grabbed his second Daytona 500 win in four years. He won the 2009 race by passing Elliott Sadler on the backstretch moments before the caution came out for rain, and he was declared the winner while waiting on pit road.

"We had a really fast car and have fast cars in the past, and I figured out a way to mess it up," Kenseth said. "I am glad it all worked out."