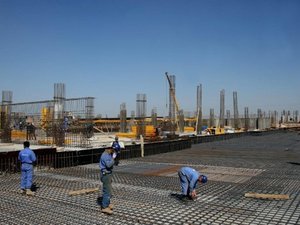 "Our message to the world is that we are open for business -- there are huge opportunities," said Araji, who was part of a government delegation urging Indian companies to seek business in Iraq.

Araji compared the opportunities offered by Iraq's broken infrastructure to "Germany after the Second World War" and said the country's infrastructure investment needs over the next 10 years totaled $500-$700 billion.

Much of Iraq's trade, transport and industrial infrastructure was destroyed during three decades of war and sanctions culminating in the U.S.-led invasion and its aftermath.

Iraqi officials conceded that violence was still a risk for investors -- a wave of attacks last week claimed by al-Qaida killed at least 42 people. But security was improving in the country of 32 million people, Araji said.

"I don't deny there are security considerations but the situation is much better than before," Araji told Agence France Presse.

Analysts say greater stability would encourage a surge of foreign investment into both the oil and non-oil economy.

India and Iraq have traditionally enjoyed friendly ties and investment analysts see Indian companies as a natural fit for Iraq because of their history of working in troubled regions such as war-torn Afghanistan.