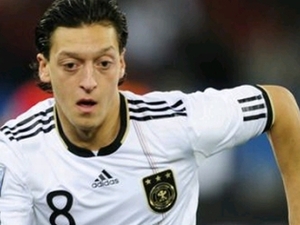 Real Madrid star Mesut Ozil has said Germany must justify their status among the favorites to win this summer's Euro 2012 by beating France in Wednesday's friendly.

The 23-year-old was Germany's player of the year for 2011, but has always said the main prize that interests him is lifting the European Championship trophy in the final at Kiev's Olympic Stadium on July 1.

Germany, who tackle Laurent Blanc's France in Bremen, join Spain, England and the Netherlands among the pre-tournament favorites, but Ozil says the Germans must turn their potential into victories.

"We have the potential to beat anyone and we have what it takes to win the title," he said after Germany won all 10 of their qualifying matches.

"We are looking forward to the game. They are one of the best teams in the world and among the favorites for the title. It's a big challenge for us."

France were drawn in Group D alongside Sweden, England, and co-hosts Ukraine, while Germany have been drawn in Group B, where they will face the Netherlands and Denmark after starting their campaign against Portugal in Lviv on June 9.

Ozil faces Portugal stars Cristiano Ronaldo, Fabio Coentrao and Pepe every day in training in Madrid and says that they all intend to return from the Euro with a winner's medal.

"They know how strong the national German team is," said Ozil.

"The boys say they want to win, but I have already told them that Germany wants to finish as undefeated group winners and European champions."

Ozil left Werder Bremen in August 2010 and after 18 months at Real Madrid, he is maturing into one of Europe's best attacking midfielders under Madrid coach Jose Mourinho.

"I am glad that I can play for the biggest club in the world. I have matured a lot in Madrid," said Ozil.

"Things have been made easy for me. He (Mourinho) talks to me a lot and the support he gives me is important. It gives me lots of confidence to be one of the most important players in the team."

The Germany squad trained for the first time on Tuesday after coach Joachim Loew gave his players Monday off following a busy weekend of German league fixtures.

Veteran striker Miroslav Klose will captain the team and he is just five goals short of Gerd Mueller's all-time record of 68 goals for Germany.