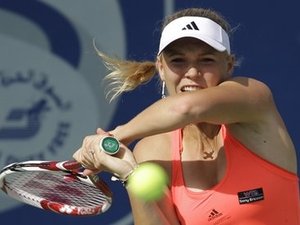 Caroline Wozniacki regained the world number one ranking from Kim Clijsters when she reached the semi-finals of the Dubai Open with a 6-2, 7-5 win over Shahar Peer on Friday.

The top-seeded Dane also avenged herself for her loss last year here to Peer, who was the first Israeli woman ever to compete in the UAE, reaching the semi-finals.

Peer failed to find her ground stroking rhythm until she was a set and 0-4 down, though she did get back to within a point of 5-5 before Wozniacki's tenacious rallying sealed it.

Clijsters held the top spot for one week after winning the Australian Open last month and reaching the final of the Paris Open last week. She and Wozniacki will both compete at Indian Wells starting on March 23.