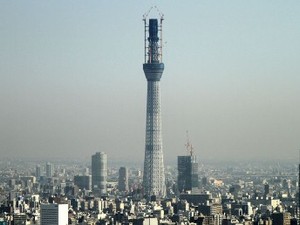 Construction of the Tokyo Sky Tree, the world's tallest self-supporting communications tower, is set to finish Wednesday, two months late because of the quake and tsunami that struck Japan last March.

Tourist bosses in the country hope the tower will be a big draw for foreign visitors, whose numbers have plummeted in the aftermath of the disaster and the nuclear crisis it sparked.

"The construction was originally scheduled to finish in December 2011 but was delayed due to a shortage of supplies after the disaster," said a spokeswoman for the operator, adding that the finished structure is sound.

Construction of the 634-meter tower near the already popular Asakusa traditional district on Tokyo's eastern side, began in July 2008.

The Tokyo Sky Tree tops the 600-metre Canton Tower in China's Guangzhou and the 553-metre CN Tower in downtown Toronto.

Some 580,000 construction workers were engaged in the construction, which cost 65 billion yen for the tower alone, the spokeswoman said.

The Tokyo Sky Tree is expected to overshadow landmarks in the capital's upscale western parts, including the 333-metre Tokyo Tower, which was built in 1958 and became a byword in Japan for the country's rapid post-war growth.

It hosts two observation decks -- at 350 meters and 450 meters above ground -- as well as restaurants and office space and sits at a former freight shunting yard along the Sumida river.