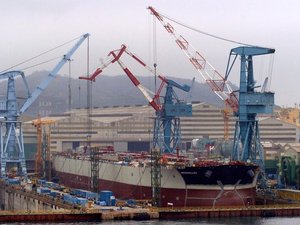 Hyundai Mipo Dockyard said Wednesday it had received an order worth $250 million to build four chemical tankers for Kuwait even as the world's shipbuilding industry suffers from a downturn.

Under the contract signed Tuesday in Kuwait, Hyundai Mipo -- a subsidiary of Hyundai Heavy Industries -- will deliver the four tankers to the state-run Kuwait Oil Tanker Company by August 2014.

Hyundai Mipo said it had now received orders for a total of eight vessels worth more than $400 million in total this year. It aims to secure orders worth $3.2 billion this year, up 80 percent from 2011.