Brazil down Bosnia in Friendly after own Goal 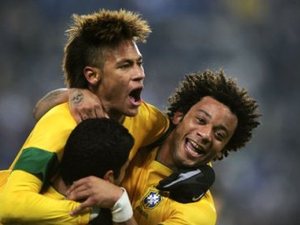 Brazil, thanks to a last gasp own goal, beat gallant Bosnia 2-1 in an international friendly here on Tuesday in the five time world champions' first run out of the year.

The 2014 World Cup hosts took a fourth minute lead when Marcelo burst forward to latch onto Dani Alves' pass, the Real Madrid player then finishing off the move in style, drilling the ball low into the far corner of Asmir Begovic's goal.

Bosnia though were back level nine minutes later.

Brazil were largely at fault when the error-prone Chelsea defender David Luiz gave the ball away, striker Vedad Ibisevic seizing his chance with Brazil keeper Julio Cesar unable to stop his rather weak effort.

Begovic, who plays his club football in England with Stoke, was instrumental in preventing the South American giants reclaiming the advantage in the 17th minute when he saved Leandro Damiao's attempt, with Bosnia defender Emir Spahic clearing the loose ball away to safety.

Despite enjoying much of the possession in an open-sided first half Brazil, with Ronaldinho and Neymar in their ranks but no Kaka, went into the break on level terms against the team that only just missed out on qualifying for Euro 2012.

Brazil's attack was missing its first half potency after the interval, with coach Mano Menezes replacing Flamingo veteran Ronaldinho with Ganso after the hour mark - Hulk came on for Hernanes shortly after.

Menezes, who wants to go through various permutations in the two years before Brazil host the World Cup, could afford to use this friendly to test some home-based players, like Neymar.

And on 74 minutes the Santos starlet saw his curling shot into the far corner saved by Begovic in a move set up by Ze Elias.

Hulk fluffed a gilt-edged chance late on when he missed the ball completely after being set up by Alves.

But Brazil, who looked more dangerous following the introduction of Lucas Moura for Leandro late on, ended the night on a fortuitous high when Bosnia's Sasa Papac, who plays his club football for Scottish champions Rangers, turned the ball into his own net after Hulk had fired into the area.

As World Cup hosts, Brazil have no qualifiers to go through and are therefore honing their preparations for 2014 on a diet of friendly matches.

There are fixtures to come later this year against Denmark, the United States, Mexico, and Argentina, while they are also targeting a strong Olympic showing in London, having never landed gold to date.