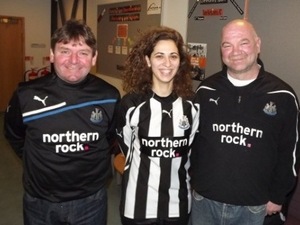 “I really like it here and I am pleased to join Newcastle United Women Football Club. The girls are talented and skillful,” Myriam was quoted as saying.

She travelled to Derby with the NUWFC Reserves and took part in her first match with Newcastle Ladies.

“It’s a great pleasure to welcome Myriam to NUWFC. Her experience will be an asset to the club and she is already very much part of the squad,” NUWFC Chairman Phil Eadon said.

Myriam was the team captain of al-Ansar Women Football Club and played for the Lebanese Women’s National Team.

“I am very happy to play with (Newcastle) and I hope I could be a good addition to the team,” she said.

She had moved to Europe in 2009 to do a 2-year Masters in Environmental Sciences and played football in Hungary while she was studying in Budapest.

In 2011, she moved to Manchester to further her studies and research and during that time she played for the University of Manchester Women football club.

Im realy intrested to join one of the UK team.
7 years of traning between UAE & lebanon.