Shalom: We Will Have to Return Nasrallah to his Underground Hideout 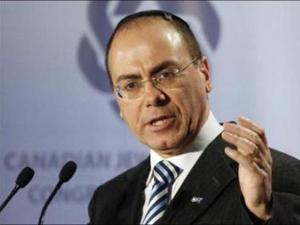 Israeli deputy Prime Minister Silvan Shalom threatened on Friday Hizbullah Secretary General Sayyed Hassan Nasrallah by saying: “We are not keen on battle, but if it is imposed on us, them we will return you Nasrallah to the underground hideout where you will stay for years.”

“The Galilee is prospering and we are spending money on it for it to prosper,” he stated.

On Wednesday, Nasrallah had warned Israeli Defense Minister Ehud Barak and Chief of Staff Benny Gantz that his fighters are prepared for a war should it be imposed on Lebanon, adding that they may be requested to occupy the Galilee.

Meanwhile, Barak had announced during a tour of the Israeli-Lebanese border on Tuesday that the Israeli army may once again enter Lebanon.