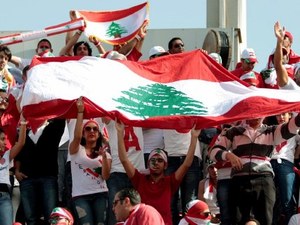 The Lebanese national football advanced to the final round of 2014 FIFA World Cup qualifiers on Wednesday despite a 2-4 loss to the UAE.

Lebanon needed a tie or a victory against the UAE to guarantee qualification to the next round for the first time in its history.

South Korea also made it through to the final round of qualifiers after defeating Kuwait 2-0.

The UAE opened the score sheet after a free kick by Bashir Saeed in the 21st minute.

The visitors’ joy was short-lived however when Ali was forced to quit the game due to injury in the 30th minute.

He was substituted by Akram Moghrabi.

The UAE took advantage of Ali’s loss by scoring in the 38th minute through Ali al-Weheibi.

Lebanon rallied however and managed to level the score right before half time through Hassan Maatouq.

In the second half however, the UAE exposed flaws in the Lebanese defense in set pieces, scoring through a free kick, taken by Ismail Matar, in the 68th minute.

Lebanon captain Rida Antar's absence due to suspension took its toll on the team and the UAE solidified its lead in the 79th minute through another goal from Saeed.

In addition to the massive Lebanese crowd, the game was watched at the stadium by Minister of Youth and Sports Faisal Karami and MPs Sami Gemayel, Ali Bazzi, Simon Abi Ramia, and Nadim Gemayel.

News of Lebanon's qualification was met with scenes of jubilation in the country with people taking to the streets despite the poor weather conditions to celebrate the achievement.

The final round of qualifications are expected to take place later this year.

Good game, we are a little weak down tge middle but great effort. And it's hard to play hard when you know it's a nothing game. Next round we need to pull our socks up and get it done. This loss is a good one. Gets us ready to fight back! Libnan wbess!!

Next time the crowd is dancing dabke for the duration of the game...The team needs it people to keep their spirits up!

Congrats Lebanon. I just got back from the game. Great atmosphere

"Lebanon needed a tie or a victory against the UAE to guarantee qualification to the next round for the first time in its history."

So how come we qualified even though we lost?

Rje3na la le3eb el boura!!! The defence was a joke and the goalkeeper has the arms of a 2 year old girl!!!
The tactics were wrong, and this is a game that should have been played not by foot but by brain.
The coach made a huge mistake: The objective should have been clear, secure the game, close ur area, get the point and to hell with the way we do it(coz u r not Barca), just do it !!!
The coach overestimated the capacities of the players, and they ran out of steam half way through the second half. Winning 2 matches doesn't mean anything, it is consistency that makes a team move forward.

miblibnan it wasn't really a nothing game. Lebanon advanced to the final round thanks to the loss of Kuwait to South Korea.

Let's not forget the unfortunate mistakes by our 2nd Goalkeeper. He's good, but the first goal he let in definitely affected his confidence. Hope he learns from it though, very happy for the team :)

Damn, I thought the game was scheduled for tonight... oh well.
According to the official FIFA website, Lebanon world ranking is #114th position, down by 2 since last month. This upcoming final round will be an amazing opportunity to improve that as it once was in the 80th some time ago.
Here are some facts i copy-pasted for you.

It is awesome to see all of us praising the Lebanese football team. Bravo. Now can we be that united about the fate of our own country? Lebanon frist and then everything else. Shou awlkoun?

What was amazing in the game was the HUGE turnout of the Leb fans ... in total there were 10321 in the stands, and the LEbs were easily over 10,000 yet not one swear word was heard and no foul slogans were shouted. I was very proud to be there watching the game with a very civilized crowd supporting their team to the last minute (except for those who started leaving after the 4th UAE goal! we need to learn to support our country to the last second). Sad though that we can not be as civilized in our own country!

Amazing how we rally around the flag when it comes to our pride. Its sa shame that by monday we will all be cursing each other over our Bhuddas or sp called political affiliation. It just goes to show take away that corupt element called Religious Politics deep in our subconcience Lebanese pride exists.

Hard luck lebanon, it was very unlucky for us that we lost because 3 goals for the UAE came from free kicks, ( 2 directly in the net) ...also it was not fair that the ref gave uae more than 20 free quicks and lebanon got nothing...