Eurotunnel to Boost Trains Ahead of London Olympics 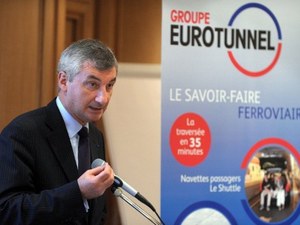 Eurotunnel, which operates the Channel tunnel between Britain and France, said on Thursday it would reduce train travel times by five minutes to boost traffic ahead of this summer's London Olympic Games.

In a conference call as the company announced its results for 2011, Eurotunnel chief Jacques Gounon said travel time under the Channel will be reduced from 35 to 30 minutes to allow for more daily trains.

The company is expecting a boost in earnings this year with both the Olympics, starting on July 27, and celebrations to mark the 60th anniversary of Queen Elizabeth II's reign in June.

Sales rose 16.0 percent to 845 million euros, as almost 19 million people and about 17.7 million tons of freight crossed the Channel using the tunnel.