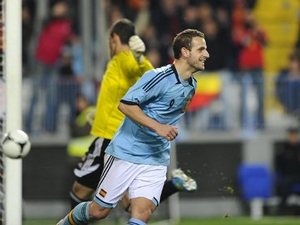 Roberto Soldado, in his first international run out since 2007, conjured up a hat-trick in Spain's 5-0 drubbing of last year's surprise Copa America semi-finalists Venezuela in a friendly here on Wednesday.

The reigning world and European champion's win was completed by goals from David Silva (41) - his first this year for club and country - and Andres Iniesta (37) as the hosts dominated this warm-up to Euro 2012.

This was Spain's last appearance before coach Vicente del Bosque announces his squad for Poland and Ukraine in May.

Valencia's Soldado came on after the break to leave his mark on the game with goals in the 49th, 52nd, and 83rd minutes and advertise his claims for inclusion in the squad perhaps at the expense of Fernando Torres, who was left out of the squad.

Venezuela were reduced to 10 men in the 66th minute with the sending off of Fernando Amorebieta for felling Soldado.

Spain begin their title defense on June 10 against Italy, before meeting the Republic of Ireland and Croatia in Group C.