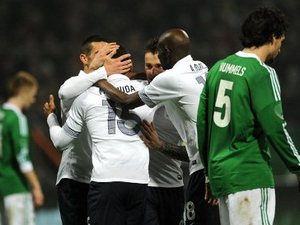 France gave themselves a pre-Euro 2012 boost with a 2-1 friendly win over an injury-depleted Germany in Bremen on Wednesday as the Germans suffered their first defeat in 11 games.

A first-half goal by France's Olivier Giroud, who then set up substitute Florent Malouda for the second, inflicted the first defeat on Joachim Loew's Germany since they were beaten by the same margin by Australia last March.

Germany's Brazil-born striker Cacau scored a late consolation for the hosts, but the French deserved the win.

It was a disciplined performance from France who open their Euro 2012 campaign against England in Donetsk on June 11 and Laurent Blanc's side dominated a weakened German team lacking five first-choice players.

"I am very pleased with the game my team played, this was one of our better performances since I took charge," said Blanc, who replaced Raymond Domenech as coach after the 2010 World Cup debacle.

Germany were missing captain Philipp Lahm, his deputy Bastian Schweinsteiger, midfielders Mario Goetze and Lukas Podolski, plus defender Per Mertesacker with injury, but their replacements failed to cope with the French.

"You have to be annoyed when you lose, but I was more concerned about the manner in which we lost," said Loew.

"We didn't find our game and France were clearly better than us.

"There was too much space between our midfield and defense and we were present enough at times in defense."

Schuerrle failed to make it to halftime after an injury, Reus did not make his mark, and it was only Ozil who really tested the French.

Germany had a couple of early chances, but the French took the lead after a superb run from Montpellier's Mathieu Valbuena who found his club teammate Giroud unmarked to bury his shot past Wiese on 21 minutes.

Germany lost Schuerrle with a suspected broken nose after a heavy collision and Bayern's Thomas Mueller slotted into his place on the left wing soon after.

Ozil attempted a long-range strike on the stroke of half-time which flew the wrong side of the post as it finished 1-0 to the French at the break.

Loew switched Miroslav Klose for Bayern striker Mario Gomez, who took over the captain's armband, after the break and moved Jerome Boateng from right-back into the center of defense bringing Schalke's Benedikt Hoewdes onto the flank.

The second goal came when Giroud played the ball into Malouda who managed to scramble the ball over the line with the help of the crossbar on 69 minutes.

It could have been more as only the offside flag prevented Tottenham Hotspur's veteran striker Louis Saha getting the third after he found the net with time almost up while Cacau grabbed the German's consolation on 91 minutes.

France now face Iceland, Serbia and Estonia at home in late May and early June, while Germany will be hoping for a more composed performance when they take on Switzerland in Basel on May 26 then Israel in Leipzig on June 1.