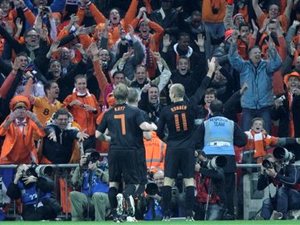 Plagued by injuries since the 2010 World Cup, Arjen Robben provided a timely reminder of his enduring quality by scoring a pair of classy goals in the Netherlands' 3-2 friendly win over England on Wednesday, 100 days before Euro 2012.

By opening and closing the scoring in at Wembley Stadium, the brilliant but fragile winger helped end a three-match winless run for the Dutch. It was just his second international appearance since the 2010 World Cup final.

After a cagey first half, Robben broke the deadlock in the 57th minute. The Bayern Munich player picked up possession inside his own half, sprinted to the other end of the pitch through a hesitant English defense and blasted the ball past goalkeeper Joe Hart.

However in stoppage time, England's defense allowed Mark van Bommel to get hold of the ball and pick out Robben, leaving the former Chelsea and Real Madrid star to send a deflected shot into the net.

So while the Netherlands played in a new all-black away strip with the words Nieuwe Meesters — New Masters — embroidered into the collars, it was an old and familiar face who did the damage.

"Players like Arjen Robben ... can change the game," England captain Scott Parker said. "It was a touch of brilliance tonight from Robben."

After setbacks in October and November for the Dutch, this victory puts Bert van Marwijk's side back on the right track ahead of the European Championship, which starts in June.

"Before this game we had a bad series, because we lost against Germany 3-0 ... (and) against Sweden and Switzerland we had difficulties," Robben said. "We have a great squad, great potential still, although everybody's getting a year older.

"But we're still at a good age and we go to the Euros to win, no doubt about that. Not with arrogance, but I think if you have a great squad you go to a tournament to win and not to reach the quarterfinals."

That is the furthest England has reached in the last decade at any tournament, going out even earlier at the World Cup two years ago.

And the hosts, who were unbeaten through 2011, had a disappointing start to the uncertain new era following Fabio Capello's resignation earlier this month.

"They needed a touch more belief that they could hurt a team of this ability," Pearce said.

Pearce harbors hopes of leading England at Euro 2012 if the Football Association cannot find a full-time successor for Capello before then.

The under-21 England coach dropped several experienced players, giving younger players a chance to shine against the Dutch.

"If we had come away from here 2-2 there might have been a better feel," Pearce said. "But it won't affect my mentality in any way. I feel I would be confident in taking the squad to the Euros."

The Netherlands' squad showed more continuity, with the starting eleven including nine who started in the World Cup final.

The visitors had the Premier League's top scorer — Arsenal's Robin van Persie — up front and left Huntelaar, the leading Bundesliga scorer, on the bench initially. Meanwhile in England's attack, Manchester United's Danny Welbeck was playing only his fourth international and searching for his first goal which never came.