F1 Veteran Barrichello to Race in IndyCar in 2012 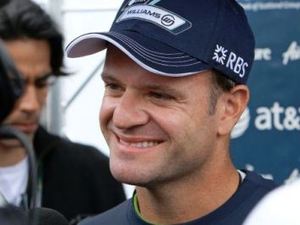 Formula One veteran Rubens Barrichello announced Thursday he will join the IndyCar series this season.

Barrichello has reached a two-year deal to race for KV Racing Technology and will make his debut at the season opener on March 25 in St. Petersburg, Florida.

"I'm very competitive and I'm not doing this just for fun, but I'll keep my feet on the ground in the beginning because I'll be a rookie despite of all my previous racing experience," Barrichello said.

The 39-year-old Brazilian will participate in all 16 IndyCar races on the calendar, including the five on oval tracks. He previously had said there was a chance he would skip the oval circuits because of safety concerns and in consideration of his family.

"I had always promised to my wife, Silvana, that I wouldn't race on ovals," Barrichello said. "But we talked a lot and in the end she said that she wouldn't interfere if this was really what I wanted to do. I think my two sons were actually the ones who helped convince her."

Initially, Barrichello thought about racing only at the Indy 500, but realized it wouldn't make sense to skip the other races on ovals.

"I wouldn't feel comfortable sitting at home and watching someone else driving my car," Barrichello said.

Barrichello drove for Williams in F1 last season but lost his spot to countryman Bruno Senna, ending a 19-year career in the series.

KV Racing co-owners Kevin Kalkhoven and Jimmy Vasser were also at Thursday's news conference to announce the deal, as were Barrichello's new teammate and old friend, Tony Kanaan. E.J. Viso of Venezuela will be the team's other driver this season.

"We are kind of pinching ourselves, it's a dream to be bringing Rubens to our team," Vasser said. "We raised our level when we brought Kanaan, and now with Rubens even more. The sky is the limit for our team."

KV Racing also announced that Kanaan's contract was extended for another two years. He had been signed by KV Racing just before last season on a one-year deal.

There had been widespread rumors of Barrichello moving to IndyCar since he tested twice for KV Racing earlier this year on an invitation from Kanaan. He drove well and had said his move to the series depended only on finding sponsors.

"This wasn't expected at all at first," he said. "But it kind of evolved after the first test and now I'm really happy to be starting this new phase in my life."

The arrival of a well-recognized name in racing such as Barrichello is welcomed by IndyCar, which is trying to revamp its image after ending last season on a low following the death of Dan Wheldon in Las Vegas.

Barrichello drove in 325 races in F1 — a record in the series — finishing second in the drivers' standings in 2002 and 2004, both times behind seven-time champion Michael Schumacher of Ferrari.