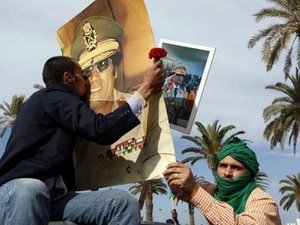 Moammar Gadhafi's regime vowed on Friday to snuff out attempts to challenge the Libyan leader, after an opposition "day of anger" became a bloodbath and two policemen were reported hanged by protesters.

According to a toll compiled by Agence France Presse from different local sources, at least 41 people have lost their lives since demonstrations first erupted on Tuesday.

That toll does not include two policemen who were killed on Friday.

Oea newspaper, which is close to Gadhafi's son Seif al-Islam, said they were killed after being captured in the eastern city of Al-Baida.

Security forces were deployed around Al-Baida on Friday, a source close to the authorities told AFP, following reports on the Internet that anti-regime protesters had seized control of the city.

"Security forces were deployed heavily around the city and control all roads in and out, as well as the airport," the source said, declining to be named.

Oea also reported that 20 people were buried in Libya's second city of Benghazi on Friday after being killed in protests. A previous toll supplied by a medical source in the city was 14 dead.

And protesters set fire to the headquarters of a local radio station in Benghazi after the building's guards withdrew, witnesses and a security source told AFP.

Seven people were killed in protests in Derna, east of Benghazi, Oea reported.

Earlier, the Revolutionary Committees, which are the backbone of Gadhafi's regime, warned protesters in no uncertain terms.

"The response of the people and the Revolutionary Forces to any adventure by these small groups will be sharp and violent," the Revolutionary Committees said on the website of their newspaper, Azzahf Al-Akhdar (Green March).

"The power of the people, the Jamahiriya (government by the masses), the Revolution and the leader are all red lines, and anyone who tries to cross or approach them will be committing suicide and playing with fire."

Several thousand mourners on Friday went straight from weekly prayers to funerals for the Benghazi dead, witnesses told AFP, with one reporting that 13 victims were buried in the city's Hawari cemetery.

In Al-Baida, a well-informed Libyan source told AFP 14 civilians have been killed since Wednesday, including both protesters and members of the Revolutionary Committees.

The source could not say how many members of the security forces had been killed.

In another sign of growing disorder, about 1,000 inmates broke out of a prison in Benghazi, Quryna newspaper reported on its website, and four convicts were killed by security forces when they tried to flee another prison outside Tripoli, a security services source said.

The overall reported toll does not include the four prisoners.

Iraq, meanwhile, denied that an Arab League summit set for March 29 in Baghdad, the first since popular unrest in the Middle East flared last month, had been postponed, as the Libyan presidency of the pan-Arab group had said.

Gadhafi, 68, is the longest-serving leader in the Arab world, but his oil-producing North African nation is sandwiched between Tunisia and Egypt, whose long-time leaders have been toppled by popular uprisings.

Opponents of his regime used Facebook to call for a national "day of anger" for Thursday, and Gadhafi sought to counter its impact with his own pro-regime rally in the heart of the capital Tripoli.

Gadhafi himself turned up briefly early on Friday, getting a rapturous welcome, according to images on state television which also showed what it called similar rallies in Benghazi, Sirte and other cities.

U.S. President Barack Obama on Friday condemned the use of violence against peaceful protesters in Libya, Bahrain and Yemen.

"I am deeply concerned by reports of violence in Bahrain, Libya and Yemen," he said in a statement read to reporters aboard Air Force One.

"The United States condemns the use of violence by governments against peaceful protesters in those countries and wherever it may occur."

Britain, France and the European Union have called for restraint by the authorities in Libya, whose relations with the West have improved sharply over the past decade after years of virtual pariah status.

France said on Friday it had suspended authorization of exports of security equipment to both Libya and Bahrain over the killing of anti-government protesters.

And Britain stopped the export of some security equipment to Bahrain and Libya because of the risk it might be used to suppress anti-regime protests, the foreign office said.