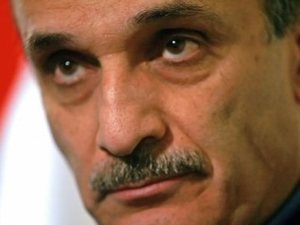 Lebanese Forces leader Samir Geagea noted that the current process of forming a new government is a “major embarrassment”.

He told the daily An Nahar in remarks published on Saturday that the current chaos over the cabinet formation will not threaten Lebanon even if it does take a long time to set up a government, explaining that the army, security forces, and justice system will prevent any instability.

Addressing the March 14 celebration next month, he said: “The Cedar Revolution supporters will express themselves through democratic and peaceful means.”

Meanwhile, he told Al-Akhbar newspaper on Saturday that the developments on the Lebanese political scene are “unacceptable.”

Geagea added: “If it weren’t for the pressure that was exerted on the March 14 camp, the shift in parliamentary majority would not have happened.”

Addressing Hizbullah chief Sayyed Hassan Nasrallah’s recent statements that the American agenda in the region is collapsing, the LF leader stated: “The popular movements in the Arab world are not directed against the Americans, but against corruption and they are aimed at achieving more freedom and democracy.”

Responding to a question, Geagea replied that he does not consider himself a leader of the Sunnis after PSP leader Walid Jumblat’s withdrawal from the March 14 camp, adding: “I never contemplated the idea of becoming president or assuming a position in cabinet. All I seek is moving forward with my political agenda.”

“The March 14 camp is in need of a number of leaderships and not just one leader,” he pointed out.

In addition, he did not deny a Wikileaks report that he had informed former U.S. Ambassador to Lebanon Michele Sison that he opposed Caretaker Prime Minister Saad Hariri’s return to the premiership.

Geagea explained: “It’s not a matter of lack of trust, but it’s a matter of what’s best for the country during a certain period.”