Internet Cut Off in Libya 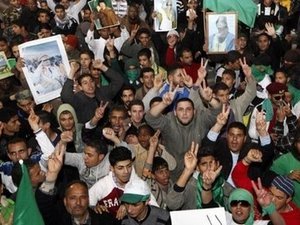 Internet service was cut off in Libya on Friday as the regime evidently moved to strip anti-government protestors of ways to organize and communicate, according to Arbor Networks.

Libya "abruptly disconnected" from the Internet at 4:15 pm.(00:15 GMT Saturday), according to the U.S. based tracker of online traffic.

Internet traffic in and out of the country halted suddenly after being throttled earlier in the day, according to an Arbor Networks chart titled "Libya Pulls the Plug."

The regime of Libyan leader Moamer Kadhafi vowed on Friday to snuff out attempts to challenge the Libyan leader, after an opposition "day of anger" became a bloodbath.

According to a toll compiled by AFP from different local sources, at least 41 people have lost their lives since demonstrations first erupted on Tuesday.