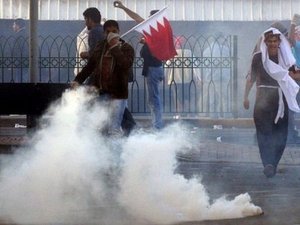 The Bahraini opposition on Saturday rejected an offer of dialogue from the authorities saying it would join talks only after the cabinet quits and troops behind a bloody crackdown leave the streets.

The Islamic National Accord Association, which is boycotting parliament in protest at the army's iron-fisted response to the wave of protests sweeping the small but strategic Gulf kingdom, said 95 people were wounded on Friday, of whom three were "clinically dead."

"To consider dialogue, the government must resign and the army should withdraw from the streets" of Manama, said the group's parliamentary leader, Abdel Jalil Khalil Ibrahim.

He was responding to an offer of talks from the Sunni royal family once calm has returned to the Shiite-majority offshore banking centre.

Crown Prince Salman bin Hamad al-Khalifa promised a sweeping national dialogue once calm is restored, and soon afterwards King Hamad formally announced that he had assigned his heir to start those discussions.

On Saturday, EU foreign affairs chief Catherine Ashton said it was vital that dialogue "should begin without delay," adding she was "deeply concerned" by violence against protesters.

"I urge the Bahraini authorities to respect fundamental human rights including freedom of expression and the right to assemble freely," Ashton said.

"The dialogue announced by Bahraini Crown Prince Sheikh Salman bin Hamad al-Khalifa to meet the demands and aspirations of the people should begin without delay," she said.

Both Britain, the former colonial power in Bahrain, and the United States, which headquarters its Fifth Fleet in the archipelago state, have warned their nationals to avoid non-essential travel.

The army's intervention came after a deadly police action prompted protesters, inspired by the February 11 overthrow of veteran Egyptian president Hosni Mubarak, to occupy Pearl Square in the heart of Manama.

Opposition MP Ali al-Aswad has said Bahraini security forces, many of whom are recruited from Asian countries, had on Friday "fired live bullets at more than one thousand people" trying to return to Pearl Square.

U.S. President Barack Obama condemned the violence in a telephone conversation with the king.

He said "the stability of Bahrain depends upon respect for the universal rights of the people of Bahrain, and a process of meaningful reform that is responsive to the aspirations of all Bahrainis," according to a White House statement.

The prospect of a prolonged crisis raises fears of a potential flashpoint between Shiite Iran and its Sunni-ruled Gulf Arab rivals, if the Islamic republic tries to capitalize on the protest led by Bahrain's disaffected Shiite majority.

Iran has "condemned the violent confrontation" and urged the Bahraini government to show restraint.

In a television interview, Prince Salman said "our dialogue must take place in a climate of total calm," adding that "no issue can be excluded from that dialogue."

"What is happening today in Bahrain is not acceptable," he said. "We have reached a dangerous stage that necessitates that each of us acknowledges the responsibilities ... Bahrain today is divided."

In a statement read on state television, King Hamad charged Prince Salman with starting a "dialogue with all sides and groups in the kingdom with no exceptions."

On Friday, thousands of mourners attended the funerals of four people killed the previous day.

They chanted slogans calling for the ouster of the Al-Khalifa ruling family at the same time as songs urging unity between Shiites and Sunnis.

A banner carried at the head of a funeral procession hit out at concerns by Formula One chief Bernie Ecclestone that next month's season-opening Bahrain Grand Prix may have to be cancelled because of the unrest.

"Mr. Ecclestone, are our lives a price for your Formula One?" it asked, in English.

Britain has revoked 44 licenses for the export of security equipment to Bahrain because of the risk it might be used to suppress anti-regime protests, the Foreign Office said. France has also suspended security equipment exports.

In the 1990s, Bahrain was plagued by a wave of Shiite-led unrest before reforms in 2001 restored its elected parliament, which was dissolved in 1975, and officially turned the emirate into a constitutional monarchy.