Thunder Storm back to Beat Magic 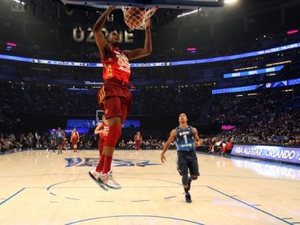 Jameer Nelson added 15 points with nine assists for Orlando, but the Magic could not hold off the Thunder's furious late surge.

Orlando led 81-70 going into the final period, but with Howard on the bench early in the fourth Oklahoma City began to turn the tide.

Durant capped an 11-2 scoring run with two free throws and a three-pointer as the Thunder took a 90-89 lead with less than four minutes remaining.

The Thunder did not trail again, although Daequan Cook left the door open for the Magic when he missed a pair of free throws with three seconds to play.

Orlando could not take advantage, and Jason Richardson was off-target with a potential game-tying three-pointer as time expired.

The Thunder claimed a seventh straight victory, improving to 29-7.