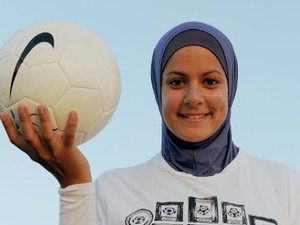 Football chiefs will be urged to overturn the ban on female Muslim players wearing headscarves this weekend.

FIFA member Prince Ali of Jordan will try to persuade the International Football Association Board (IFAB), the body responsible for the sport's rulebook, with an example of a specially designed headscarf or hijab that is designed to detach immediately if pulled.

Until now, the IFAB have banned headscarves on safety grounds in case they caused head or neck injuries.

But the new hijab could be approved when the IFAB meet in Bagshot, south of London, on Saturday.

Prince Ali, speaking in London on Thursday, said: "Women's football has come a long way, as we experienced in the last women's World Cup, and the present situation is saying to women worldwide that you're not allowed to participate for a reason that makes no sense.

"That's prejudice. It's not fair. It has to be dealt with.

"Long sleeves and leggings are already allowed. This is not an issue of religious symbolism -- it is simple a case of cultural modesty and I'm tackling this now because it is big issue for many, many women all across the world

"I'd be very disappointed for the game if IFAB said 'no'. It's an issue which will not go away and I'm optimistic this will happen.

"If not there will be lot of soul-searching about what the priorities are in this sport. Everyone from the United Nations to the regional federations are supportive so I don't see what the problem is."

Contrary to what the article says, there is a very good reason to ban headscarves in the West: they represent a religion/culture which clearly and formally rejects some of the main humanist values of the west, such as true equality and laicity in government and the law which are the basis of freedom of thought and speech.