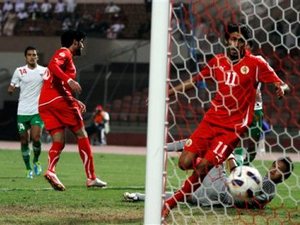 FIFA has launched an investigation into the "unusual outcome" of Bahrain's 10-0 victory over a weakened Indonesia team in a World Cup qualifying match.

Bahrain's win on Wednesday has raised suspicion because it needed to make up a nine-goal deficit on Qatar in the group standings to have a chance of advancing to the next round.

Bahrain also needed Qatar to lose its last match, but the Qataris scored an 83rd-minute equalizer in a 2-2 draw at Iran to instead reach the next stage of the Asian qualifying tournament.

"FIFA security will conduct a routine examination of this game and its result," football's world governing body said in a statement on Thursday.

FIFA insisted an initial probe was justified "given the unusual outcome against results expectation and head-to-head history, and in the interests of maintaining unequivocal confidence in our game."

"The important thing is that if there are suspicions you have to investigate it," FIFA vice president Prince Ali said during a trip to London. "It might just be a coincidence, however there might be something behind it."

Warning about the threat posed by match-fixers, the Asian Football Confederation executive said that "many times you see those involved are a step ahead."

"Match fixing is a huge issue that needs to be tackled," Prince Ali said. "We will have to see what the investigation comes out with. But it has to be taken very seriously regardless of what region it is played in. It is a world issue, not just simply in the Asian region ... (and) we need to put as much resources we can into this aspect of football."

The Asian Football Confederation said Friday it supported the FIFA probe and would "cooperate closely with the world football governing body in the investigation."

On Wednesday, Indonesia goalkeeper Samsidar was sent off after just two minutes, and Bahrain took the lead from the resulting penalty. The hosts also scored a second penalty in the first half as they took a 4-0 lead by halftime, and continued to pour in goals after the break.

It also fielded several inexperienced international players in Bahrain after suspending others who play for clubs in the breakaway Indonesian Super League.

The Indonesian football association (PSSI) recognizes the Indonesian Premier League, and the dispute jeopardized the participation of ISL winner Persipura Jayapura in the Asian Champions League last month. Persipura required a Court of Arbitration for Sport ruling in order to face Adelaide United.

The PSSI has been in turmoil in recent years, and launched an unsuccessful bid to host the 2022 World Cup.

FIFA removed Indonesia from the contest midway through the bid process when football officials failed to persuade the government to provide hosting guarantees.