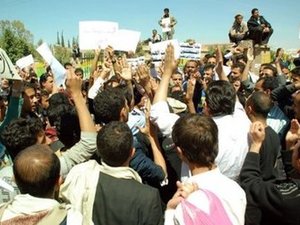 One protester was shot dead and five wounded in clashes with Yemeni government supporters near the capital Sanaa's university campus on Saturday, an AFP correspondent reported.

The death, the first in Sanaa in a week of similar clashes, came as government supporters, armed with guns, batons and rocks, tried to break into the campus and students responded by hurling stones.

The AFP reporter saw the body of the student, hit by a bullet, as the clashes raged outside the university.

Five students were also wounded, one of them seriously, according to medics.

Tribesmen and plainclothes police also attacked the students during the clashes, the AFP correspondent said, adding that police did not intervene but blocked the roads leading to the campus.

Later, supporters of President Ali Abdullah Saleh dispersed the protesters and took control of the area around the university campus and surrounding roads, the correspondent said.

On Friday, at least four anti-regime protesters were wounded by supporters of President Ali Abdullah Saleh who attacked the demonstration armed with batons and axes.

Students have tried for the past week to march on the presidential palace but have been intercepted each day by stone-throwing regime supporters.

Protests continued early Saturday in the main southern city of Aden, where fierce clashes on Friday killed four and injured 17 people, five of them soldiers, according to medics and witnesses.

Demonstrations took place in the Aden neighbourhoods of Khor Maksar, Al-Mansura, Sheikh Osman and in Dar Saed where security forces detained eight people, as well as in Mualla, the sources said.

"The ruling party are killers" and "no south, no north our revolt is for the youth," chanted the protesters.

Late Friday, 50 members of the ruling General People's Congress (GPC) resigned from the party in protest against attacks by security forces on protesters, which have left 10 people dead in Aden since last Sunday.

In Taez, south of Sanaa, where protests have also been raging for a week, hundreds of anti-regime protesters were blasted in a hand grenade attack Friday leaving one dead and 47 people wounded, according to medics.

On Saturday, local officials told AFP that the authorities have detained eight officials accused of links to the Friday attacks.

U.S. President Barack Obama on Friday condemned the use of force against protesters in Yemen, Bahrain and Libya after government forces brutally sought to crush the latest wave of Middle East violence.

Protests have become increasingly violent in poverty-stricken Yemen despite calls by Saleh -- who was elected to a seven-year-term in September 2006 -- urging dialogue to form a government of national unity.

Amnesty International on Friday issued a fresh condemnation of the violence.

"Yemeni authorities seem to be stepping up their crackdown on protesters and we are gravely concerned that if that continues, the death toll will inevitably rise," the rights watchdog said in a statement.