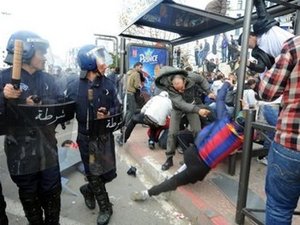 An Algerian opposition deputy was badly hurt in clashes with riot police as protesters tried to rally in a central Algiers square Saturday and was thought to be in a coma, his party said.

Tahar Besbes, of the Rally for Culture and Democracy, was hit in the stomach by a policeman and hit his head on the pavement when he fell, party spokesman Mohsen Belabbas said.

Some 200 protesters managed to get into May 1 Square, where they chanted "Algeria free and democratic" and "People want the fall of the regime" as police blockaded adjacent streets.

In a protest a week ago some 2,000 demonstrators succeeded in gathering in the square but were prevented from starting a planned four-kilometer (three-mile) march to Martyrs Square.

The rally was organized by the National Coordination for Change and Democracy (CNCD), a month-old umbrella group made up of the political opposition, the Algerian human rights league and trade unions.

Algerian demonstrators have been emboldened by anti-government protests in neighboring Tunisia and in Egypt that ousted the leaders of both north African countries.

The CNCD wants the immediate end of President Abdelaziz Bouteflika's regime, citing the same problems of high unemployment, housing and soaring costs that inspired the uprisings in Tunisia and Egypt.

As previously police were deployed in strength Saturday, with anti-riot gear and armored vehicles, to stop the demonstrators assembling.

Overnight posters opposed to the demonstration appeared on walls across Algiers, reading, "Don't tread on my peace and freedom".