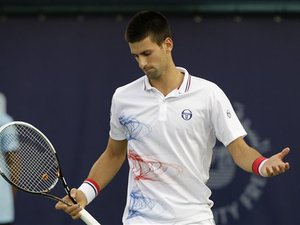 Top-ranked Novak Djokovic lost for the first time this season, falling to Andy Murray 6-2, 7-5 in the semifinals of the Dubai Championships on Friday.

Federer, aiming for his fifth Dubai title but first in five years, said he expected a tough match from Murray. Murray leads their matchups 8-6, but they haven't met since Federer won in the ATP finals in 2010.

"I just think Andy is an amazing player, and so far he's proved that this year. He's in the finals now with a great win against Novak," he said. "We know each other's games well. I'm just excited playing against him again after such a long time."

Murray gave himself a much-needed boost of confidence after losing to Djokovic in five-sets in the Australian Open semifinals.

"I think it's big for me that after Australia this year I've come back and had a win like tonight," Murray said. "Hopefully that will set me up well for the year. Confidence in tennis and almost any individual sport is so important. A win like tonight will do that no harm."

Especially the ease of it at Aviation Club.

Murray broke to go up 4-2 and saved two break points to make it 5-2. Murray won 94 percent of his first service points in the first set and 85 percent overall.

Murray jumped out to 3-0 in the second. He led 5-3 and served for the match, then Djokovic took more chances. Djokovic broke Murray for the first time then tied it at 5. But Murray won the final two games, breaking Djokovic to win the match when the Serb sent a forehand long.

"The first set I served very well and was aggressive when I had my chances," Murray said. "In the second set, he started going for more and making mistakes because it's tough to always grind out matches. I think that was the difference."

Murray said he felt his nearly five-hour loss to Djokovic in Australia paid dividends on Friday, especially in the second set.

"The thing you learn after a match like that is how much you need to sort of suffer on the court to win matches like that, and also how important it is," he said.

"It wasn't just the Australian Open, but the match in Rome last year was brutal. It was over three hours and we finished really late in the evening," he said. "They're tough matches to lose, but because you gave 110 percent and fight for every single point, it makes it more difficult for Novak."

"I was fighting for it, but, you know, Andy played a great match," Djokovic said. "He was the better player today. He was serving really well. I made a lot of unforced errors when it was important. But, look, this is sport. It's normal that in some matches you can't pull out your best when you need to."

Djokovic denied that his four weeks off since winning the Australian Open — a time in which he collected several awards and went skiing with friends — influenced the outcome of the match. Still, he appeared rusty in the early stages of the tournament, toiling to beat 72nd-ranked Cedrik-Marcel Stebe and 74th-ranked Sergiy Stakhovsky.

"I thought I've been doing well since Wimbledon last year. You know, I've been having a lot off-court activities since I became No. 1, but I have a team of people that controls it well," he said.

"Obviously there is a lot of temptations and a lot of things that you can enjoy. But it's normal. You can't on one hand just be 100 percent of your life in the tennis. You are young. You have to enjoy life."

Federer, who came into the match with a 9-2 record against del Potro including in last month's Rotterdam final, struggled to gain an edge early on. Both players held serve in the first set and Federer won it only on his fourth set point in the tiebreaker with a forehand down the line.

The second set was just as tight, as del Potro won his points off his big serve and Federer dominated at the net. It went to a second tiebreaker, this time with del Potro going up 5-0 and 6-2. But Federer ran off four points to tie it at six and won it when del Potro's backhand went long.

"It was a good comeback, especially on a quick court," Federer said. "I didn't believe I was going to come back, but at least sort of make him a bit nervous. Next thing I know, I had a great point at 6-all and I was able to come through. So it was a great match for me."