Safadi: I Voted for Miqati Out of the Country’s Interest 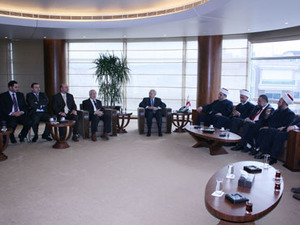 Caretaker Minister of Economy and Trade Mohammed Safadi stated on Saturday that he voted for Najib Miqati for the premiership out of Lebanon’s interest and the safety of its people.

He said before his visitors in Tripoli: “I voted for him and stand by him over his desire to maintain Lebanon and its democratic system, as well as his keenness to bolster Tripoli’s position in the country.”

“We have a desire to express the Tripoli residents’ position who had a leading role in the March 14 revolt,” he added.

“We represent Tripoli and oppose its marginalization and we want to pursue developmental goals in the North after several promises by officials who had key role in economic and developmental projects,” the minister said.

“No one has the exclusive rights to speak on behalf of those who demanded freedom, sovereignty, truth, and social justice,” Safadi stressed.

Furthermore, he praised Miqati for his efforts in forming a new government, warning those “banking on his failure” that their speeches of incitement will negatively affect the people.