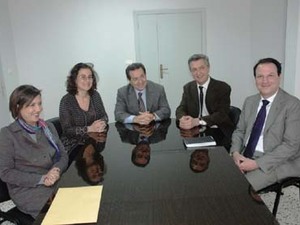 Caretaker Labor Minister Butros Harb noted on Saturday that the government formation is not only facing obstacles from the March 14 camp, but also “greater ones” from the March 8 camp.

He noted after meeting with United Nations Relief and Works Agency Commissioner-General Filippo Grandi: “The greater problem lies between Prime Minister-designate Najib Miqati and President Michel Suleiman and between the forces that nominated the premier-designate to his position.”

“It appears that the conditions the March 8 forces are trying to impose are hindering the Cabinet formation in that they allowed some sides, meaning FPM leader MP Michel Aoun, to impose his conditions in the distribution of portfolios on the president and PM-designate,” he stressed.

“This of course opposes the process of government formation and contradicts the jurisdiction of both president and prime minister” and consequently Lebanon’s entire democratic system and constitution, he added.

Regarding the March 14 camp’s position towards Cabinet, the minister said that the forces will not abandon the principals they presented to Miqati in order to participate in Cabinet.

Harb said that once Miqati respects and commits to these values, then the March 14 forces may take part in government.