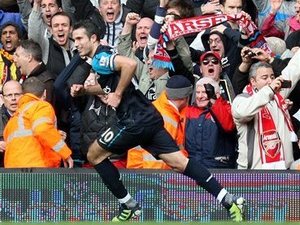 Dirk Kuyt missed a penalty for Kenny Dalglish's side before Laurent Koscielny's own goal gave the hosts the lead.

But Arsenal skipper Van Persie equalized before half-time and then hit a stunning stoppage time winner - his 31st in all competitions - to secure a fourth straight league win for the Gunners.

Liverpool's first home defeat of the campaign leaves them 10 points adrift of fourth-placed Arsenal and in need of a miracle to qualify for the Champions League.

On a bitterly frustrating day for the new League Cup winners, Liverpool twice hit the woodwork.

Liverpool captain Steven Gerrard showed off the club's first silverware for six years before kick-off when he paraded the League Cup, secured after a penalty shoot-out win over Cardiff last Sunday, in front of a sell-out crowd.

Unfortunately for home fans, that was the last they saw of Gerrard.

The inspirational midfielder's hamstring injury while on England duty against the Netherlands in midweek meant he was unable to take part in a match his team had to win to stay in contention for a Champions League spot next season.

Victory at Wembley last week guaranteed the club a place in next season's Europa League but Dalglish wants his side to end the season with a flourish and secure a return to the Champions League stage for the first time since 2009.

Arsene Wenger's side started from where they finished against Spurs as Pepe Reina was forced to produce a fine save to prevent Theo Walcott from firing the visitors into an eighth minute lead following Mikel Arteta's 50-yard pass.

Liverpool responded with Suarez almost capitalizing on an error by Koscielny before the Uruguay striker earned his side an 18th minute penalty after being fouled by Arsenal keeper Wojciech Szczesny.

But Szczesny, who escaped a yellow card, made amends by keeping out Kuyt's spot kick before the Polish keeper produced a second stop to deny the Dutchman's follow-up.

Liverpool had failed to score in their previous two Premier League home games but they took a 23rd minute lead when Koscielny sliced Jordan Henderson's low cross from the right into his own net at the near post.

Suarez was denied by the woodwork before Arsenal conjured up an equalizer out of nothing in the 31st minute after sloppy defending by the hosts.

A fine cross by Bacary Sagna found Van Persie who nodded home from five yards out.

The drama continued as Suarez was denied by another fine Szczesny save after a brilliant solo run by the former Ajax man, while Kuyt hit the woodwork on the stroke of half-time after connecting with Charlie Adam's cross from the left.

Arsenal's cause was not helped by the untimely departure of midfielder Arteta on a stretcher in the 53rd minute after running into Jordan Henderson.

Defender Martin Kelly, starting in place of the injured Glen Johnson, missed a glorious chance from inide the six-yard to earn Liverpool victory after Henderson delivered a fine 70th minute cross into the six-yard area.

At the other end, Reina's outstretched leg prevented Walcott from winning it for Arsenal.

An entertaining match looked set to end in stalemate before Van Persie unleashed a terrific volley from an acute angle following a great ball from Alex Song deep into eight minutes of stoppage time.