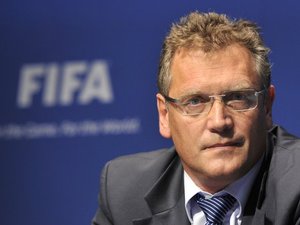 Brazil Sports Minister Aldo Rebelo said Saturday his country would no longer recognize FIFA secretary general Jerome Valcke as a spokesman after he slammed the country's faltering organization of the 2014 World Cup.

"The government will no longer accept the secretary general as FIFA spokesman," Rebelo told a press conference a day after Valcke went so far as to suggest the organizers needed a "kick up the backside."

A furious Rebelo dubbed Valcke's comments as "impertinent," "inappropriate" and "offensive" and said it was difficult to see how they could serve to foster cooperation between Brazil and FIFA.

Rebelo said he intended to contact FIFA president Sepp Blatter and inform him the Brazilians did not wish to engage in further discussions with Valcke. "I hope he will understand," the minister said, quoted by Brazilian media.

Asked if Valcke would be received were he to come to Brazil, Rebelo stated simply: "No."

In a FIFA statement made available to Agence France Presse he said: "If the result is that they no longer wish to speak to me and that I am no longer the person they wish to work with then I find that a little puerile.

"I will go to Brazil on March 12," Valcke said in London.

FIFA have for months expressed varying degrees of concern over the extent to which preparations are on track for the first World Cup in Brazil since 1950.

But Frenchman Valcke pulled no punches on Friday when he said that although there was no danger of Brazil losing the event, he believed progress was much too slow.

"I don't understand why things are not moving. The stadiums are not on schedule anymore and why are a lot of things late?" asked Valcke.

"In 2014 we will have a World Cup. The concern is nothing is made or prepared to receive so many people because the world wants to go to Brazil.

"I am sorry to say but things are not working in Brazil. You expect more support -- there are these endless discussions about the World Cup bill. We should have received these documents signed by 2007 and we are in 2012.

"You have to push yourself, kick your arse and just deliver this World Cup and that is what we will do."

Valcke also suggested the priority in Brazil was to win the tournament rather than organize a good World Cup.

Meanwhile, former striker and 1994 World Cup winner Romario, who has made frequent criticism of organizational progress from the sidelines, insisted that FIFA was essentially correct in its assertions, even if they had been made in an impolite manner.

"When Valcke used the expression 'kick up the backside' I considered it ill-placed and somewhat rude. But he is 100 percent correct in saying that Brazil is behind the pump," Romario said on his Twitter account.