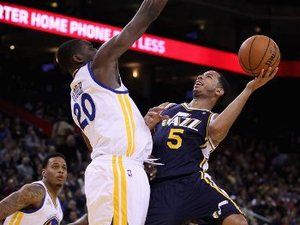 Harris was fouled by Heat star Dwyane Wade on a driving layup with the Jazz down by one point. He made the layup then sank a free throw to cap the scoring and give the Jazz their second consecutive win.

Miami's Udonis Haslem had a chance to win the National Basketball Association game for Miami Friday but his jump shot at the buzzer missed.

The Heat were without forward Chris Bosh who missed his second straight contest due to a death in the family.

Utah led 27-26 after one quarter before opening up a lead in the second. Alec Burks capped an 11-1 run by nailing a jump shot to give Utah a 57-44 lead at halftime.