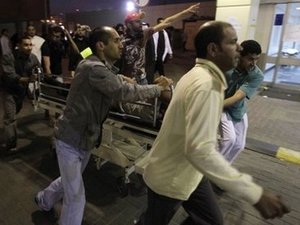 "Saudi Arabia is carefully following the developments... and calls upon brothers in Bahrain to be reasonable in proposing their ideas, and accept what was offered by the government," state news agency SPA said quoting an unnamed official.

The Shiite-led opposition has demanded a "real constitutional monarchy" and the resignation of the government, led by King Hamad's uncle Sheikh Khalifa bin Salman al-Khalifa, who has been prime minister since 1971 and is widely disliked by the opposition.

Saudi Arabia also voiced its "absolute rejection of any foreign meddling in the internal affairs of Bahrain," which has a Shiite Muslim majority but is ruled by the Sunni Al-Khalifa dynasty.

"The people of Bahrain and its government are keener on the security and stability of their country," SPA said.

Saudi Arabia "stands with all its capabilities behind the state of Bahrain and its brotherly people," it said.

Bahraini Crown Prince Sheikh Salman bin Hamad al-Khalifa has offered to open a sweeping national dialogue with the opposition, after a deadly police raid on Pearl Square on Thursday, which was followed by army deployment in the streets of Manama.

Protesters flocked to the square again on Saturday after the army was ordered to return to base.

Riot police fired tear gas in an unsuccessful attempt to disperse the demonstrators but then withdrew as Sheikh Salman, who is also deputy commander of the armed forces, ordered police and troops alike to hold back.