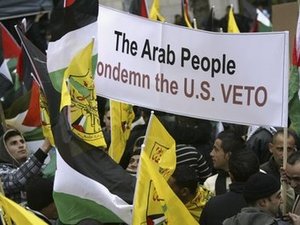 Around 3,000 Palestinians gathered in the West Bank on Sunday to protest against the U.S. veto that nixed a Security Council resolution on Israeli settlements.

The crowd massed in Ramallah's Manara Square, a central roundabout in the West Bank city, waving banners and shouting slogans against the American administration.

"Obama, you despicable man, we want self-determination!" shouted protesters, many of them members of Palestinian president Mahmoud Abbas' Fatah party, of the U.S. president.

Fatah central committee member Mahmoud al-Alul told the crowd: "This decision is against the Palestinian people and its freedom, and it supports Israeli injustice, oppression and occupation.

"We tell Obama that we are a people that doesn't bow to anyone," he said, before demonstrators interrupted with cries of "get out Obama, get out you settler."

In Jenin, Palestinian prime minister Salam Fayyad accused the United States of blackmail amid Palestinian allegations that Washington threatened to curtail aid if the settlements resolution was not withdrawn.

"We didn't and will not accept blackmail and neither will our people," Fayyad said. "We are not interested in aid from any party that threatens to cut it for political reasons.

"The U.S. approach must change because these double standards cannot continue and this situation is unacceptable."

Fatah called for the protest after the United States used the first veto of Obama's administration to prevent a resolution that would have condemned continued Israeli settlement building.

The resolution, drafted by the Palestinian leadership in an attempt to pressure Israel to halt settlement construction in the West Bank and east Jerusalem, was supported by all 14 other members of the Security Council.

The United States said its veto should not be interpreted as support for Israeli settlement construction, but that it did not believe the United Nations was the best place to resolve the decades-old Israeli-Palestinian conflict.

But in Ramallah, the veto drew fury and disappointment.

"No to negotiations with Israeli settlements and American arrogance," one banner held by demonstrators read.

"First, when all the Arab people are demonstrating against their leaders, the Palestinian people comes today to support its brave leadership's decision," he said.

Second, it exposes America's "false claim that it is the country of freedom, as it officially announces its support for the occupation and settlements and the oppression and injustice against our people."

The United States secured the relaunch of direct talks between Israel and the Palestinians in September 2010, after a hiatus of nearly two years.

But the negotiations ground to a halt just weeks later, with the expiry of an Israeli moratorium on settlement building in the West Bank.

The Palestinians insist they will not negotiate while Israel builds on land they want for a future state.

Palestinian officials have said they will launch a new bid for U.N. condemnation of Israeli settlement building, bringing a resolution before the General Assembly.